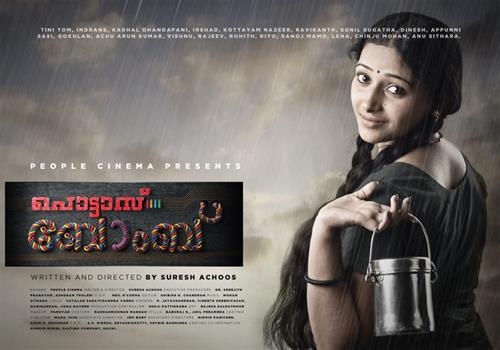 Will there be 200 malayalam movie releases in 2013? As per the number of releases till 8th March can be counted, 35 movies had made its presence on silver screen with around 160 plus are under production. It is good to see a long list of fresh faces getting associated with the malayalam film industry with a passion to build a career in movies. Pottas Bomb, the directorial debut of Suresh Achoos is the next in line waiting for release.

The theme of the movie is centered upon a juvenile home and the inmates living there. Four boys who were residing in the juvenile home run away and get themselves involved in a murder. The movie travels through the murder mystery and investigation which makes it a thriller. Suresh Achoos who had directed many dramas and short plays will make his big screen entry with 'Pottas Bomb', which would also mark the presence of many new faces in front and behind the camera.

Tiny Tom who has already become a high-flying actor in malayalam will be donning the lead character, Circle inspector of police who is in charge of the murder investigation. It would be the second outing for Priyanka in malayalam after her marriage with Lawrence Ram, a Chennai based assistant director. Priyanka will be seen in the movie as a social activist, a good friend to Tiny Tom. The character in the movie did attract Priyanka who had proved her acting skill on camera along with winning the State Award for Best Actress in 2009.

For Tiny Tom, 'Pottas Bomb' will be his second film as sole hero after making a promising act in Housefull. The interesting plot made Tiny to node his head for the project which would be a stepping stone in his acting career. The camera of the movie is wielded by Neil D'Cunha who had taken pain to capture the natural beauty. For the lyrics of Vayalar Sharath Chandra Varma, the tunes have been set by Mohan Sithara. Pottas Bomb which is being produced by People Cinema has wrapped the shooting and would reach theatres during this summer.