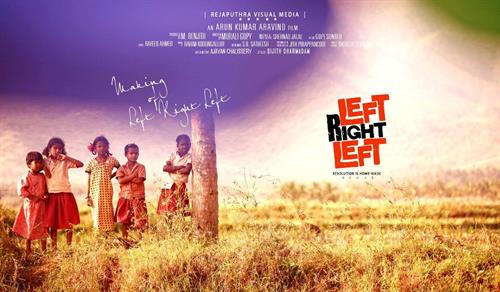 After keeping his presence alive behind the camera as film editor for 11 years, Arun Kumar made a diversion in his travel getting tagged as the director of two movies which in return gave well appreciation. After experiencing as a visual effect artist, Arun Kumar worked with prominent directors including Priyadarshan for his 2004 release movie 'Vettam'. His experience working with reputed directors like T.K Rajeev Kumar, Shaji Kailas, and Suresh Krishna gave his courage to turn his career to film making.

His directorial debut 'Cocktail' gathered good reports from the box office. 'E Adutha Kalathu' was really a path breaker winning rave reviews from around the globe. It bold and realistic narration and the inventive style of interlacing story threads together was well accepted while the movie gathered a number of awards including Best Asian Film in the International film festival of Kerala. The dream duo of Arun Kumar and Murali Gopi is back again with yet another project titled 'Left Right Left'.

Produced by M.Renjith under the banner of Rejaputhra Films, the movie will be blessed with the presence of Indrajith Sukumaran, Murali Gopy, Siddique, Suraj Venjaramoodu, Hareesh Peradi, Sreejith Ravi, Saiju Kurup, Irshad, Sudheer Karamana, Ahmed, Baiju, Lena Abhilash, Remya Nambeeshan, Anusri and Sree Dhanya. Shehnad Jalaal would wield the camera while the Art works would be safe in the hands of Prasanth Madhav. Gopi Sunder will lend his hands for setting the tunes. The movie is expected to hit the theatres in May 2013.

'Left Right Left' does not travel the way as other stories are narrated. Its story will not have beginning, middle, and end. But it draws the incidents happened in the life of few characters who represent the present society.

Sub Inspector of police K P Jayachandran (Indrajith), Roy Joseph (Murali Gopi) an ordinary man brought up in an orphanage, his wife Anita (Lena), Jennifer (Remya Nambisan) a nurse are some of the characters who are selected randomly from the living society. Jayan( Indrajith) popularly known as 'Vattu Jayan' is bold in heart who intervenes in every panic situations.

Roy Joseph (Murali Gopi) teaches at an orphanage while his wife Anitha(Lena) is a mass communication teacher. Set at the back drops of three periods, the movie tells the story whicht happens in 60s/70s, the 80s/90s and the present. Shot at the beautiful locations at Thiruvanathapuram and Nagercoil, this social drama thriller is one of the most anticipated malayalam movie in 2013. So get ready to get entertained with 'Left Right Left' as it reaches theatres in May.