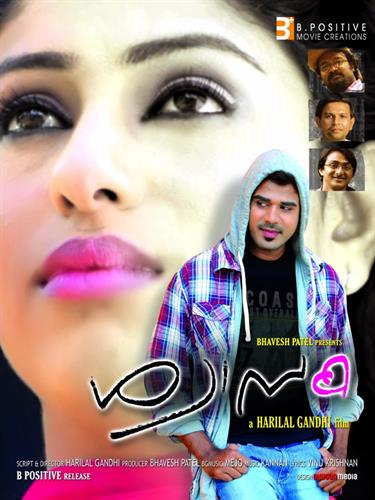 With huge doors wide open, the malayalam film industry had been watching the arrival of aspiring filmmakers who wish to contribute their share in the field. With a passion to show their mettle on and behind the screen, young talents are gearing up to bring their best for the growing film industry.

With more than 50 movies released in 3 months and more than 150 projects are on the pipeline, the number of releases would surpass 200 in this current year. Any way let us encourage those budding artists who could contribute to the industry. Harilal Gandhi, who had sizzled in the field of ad filmmaking, is ready to get into the big league with a romance movie titled 'Swaasam' which carries a social message.

The story of the movie revolves around the life of a young chain smoker who gets into trouble on the day while he tries to convey love to his darling. Najeem (Jinu Azeez) decided to open his heart to Meera (Jyothi Pillai) on the eve of Valentine's Day. With a bouquet of flowers, Najeem walks through the heart of Kochi to find Meera and express his love to her. Struck at a moment, Najeem discovers that he was covered by cancer which could not bring him back to life.

The movie zooms into the life of the youngster giving out a message to people against smoking. Being a youngster, many of them feel that he is not man if he does not have the habit of smoking. The time seems to be cool and strong, but later it the danger which swallows your life.

Taken under a low budget, 'Swaasam' has been shot at beautiful locations with cameraman Prasant doing the work with excellence. The story, screenplay and dialogues were handled by the director himself. Other than the lead young couple, other actors have lent their face giving full support to the story. Jaffer Idukki, Niyas (Kshanakkathu), Bhavesh Patel, Murali Mohan, Kalabhavan Rahman, Dr. Padmanabhan, KTS Padannayil, Rajeswari Antharjanam, Baby Halbi and Baby Aiswarya will be donning prominent roles in the movie.

For the lyrics of Vinukrishnan, the music was composed by Kannan Bhai which was given life through the beautiful vocal chords of singers Sreenivas, Devanand, K G Markose, Manjari, Gayatri Asokan and Rimi Tomy. Prasanth Chandrabose stayed as half a soul of Harilal Gandhi zooming the camera which captured the excellent moments. The movie produced by Bhavesh Patel under BPositive movie creations would reach theatres very soon.