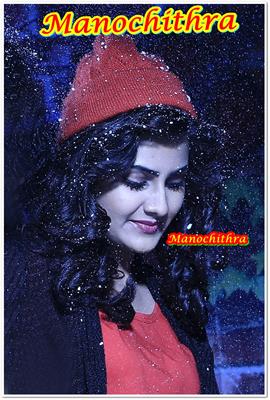 Manochithra who was previously credited as Nandhagi and as Manumika is much familiar among the tamil audience from her acting debut in Aval Peyar Thamizharasi. Even though the movie was an average grosser at the box office, she received critical applause for her brilliant acting while she was nominated for the Vijay award for best debut actress.

Later she had been a part of 3 more project, but for some reasons all of them are still in the production phase. From the movie 'Kalingathubarani' she rechristened her name to Manochithra.

The good news is that Manochithra is making her entry in malayalam through 'Pianist' directed by debutant Hyderali. In this extraordinary musical love story, the actress will play the role of a singer. Manochithra is excited to do a lengthy character in the movie alongside actor Anu Mohan. It is known that, 'Pianist' is a sure musical feast for musical lovers.

For the lyrics of Rafeeq Ahamed and Raqeeb Aalam, Riyas Shah had moved his magical fingers to produce a handful of mesmerizing tunes. As the title suggests, 'Pianist' will have music as its soul. Aju Varghese who had proved his amazing acting skill will be playing the role of a music director known for copying tunes composed by others.

The other cast include G.M Kumar, Thalavasal Vijay, Shaju, Vaanitha and Lakshmi Ramakrishnan. Cinematographer Prejith had zoomed the camera onto the natural beauty of Hyderabad, Ooty and Ernakulam followed by exotic locations in Nepal.

Meanwhile Manochithra is on cloud nine after her good time in the sets of Siva's untitled project which star Ajith in lead. She was happy to work with big names in the industry and felt like a family outing. Mano is waiting for the release of Netru Indru starring Prasanna and Vemal. So Mano is on the way getting her career well shaped.