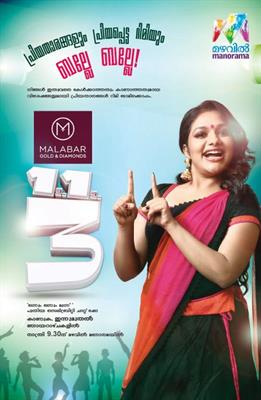 Having an experience with various channels, Rimy has taken up yet another challenging show on her shoulders. Onnum Onnum Moonu will bring invited celebrity guests who would play interesting games, talk about their career and also about their interests. Unni Mukundan and Aparna Nair, Nivin Pauly and Aju Varghese, Manju Pillai and KPAC Lalitha had lent their faces for the former episodes.

With a live orchestra and a lie-detector robot, the show would reach its zenith of excitement. Rimy Tomy who is known as a singer and performer, while on stage or television do try to make those who watch the programme. She likes to go beyond the written script which makes the best out this artist. Even though appeared in Balram vs Tharadas, Rimy would make her second outing in a guest role under Aashiq Abu's director for Amal Neerad's anthology of five films Anju Sundarikal.

Rimy excited to work in the movie was given few dialogues to be presented. But even after much try, she couldn't say the dialogues in the way it was written. Later Rimy was given the freedom to say it in her own style. Rimy as a singer has got well appreciation for 'Chingamaasam…'(Meesa Madhavan), 'Entadukke…' (Marykkundoru Kunjadu), 'Karthave…' (Christian Brothers), and now 'Kanni penne…' (Sound Thoma) with Shankar Mahadevan.