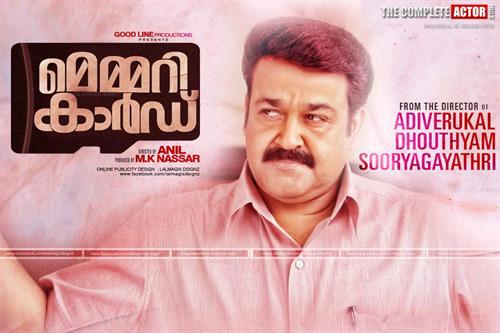 Yet another Onam festival season is approaching to keep the Keralaties happy. Even though, the festival falls in the month of September, film makers in Kerala are setting plans for majestic releases. Thappana, Gaja Pokkiri, Friday, Mr Marumakan and Run Baby Run were the 5 movies which reached theatres during the last Onam season. In 2013 the situation will not be different as a long line of movies are on the way for grand release during Onam. Other than big budget movies, a number of movies donned by youngsters are under production aiming to reach theatres in September.

As per the latest information, there will be few movies including those of Mohanlal and Dileep in the race to clinch the box office crown. P Anil's Mohanlal starrer Dauthyam and Jose Thomas and Dileep's untitled project will be released during the Onam festival season. As titled 'Memory Card', the project helmed by P Anil tells the tale of a retired military communications expert. With Mohanlal in the lead role, the movie will also have two more big names who would be playing important roles. Mohanlal who had already appeared in Douthyam, Pingami and the Keerthichakra series movies as military officer would dons the same in 'Memory Card' which would be extensively shot in Hyderabad.

'Memory Card' an action thriller, deals with those incidents that happened in six days in Hyderabad. Other than Mohanlal's character, a police officer and another person come together due to some events. Set on the backdrop of a high profile investigation, this movie written by Gireesh would be a dazzling thriller to watch. Gireesh who had scripted for movies such as Aniyan Bava Chettan Bava and Meleparambil Aanveedu tries to tell a different tale with 'Memory Card". More than that, this movie would be a comeback for director Anil who had gave hits like Douthyam and Suryagayathri. Tamil actor Prakash Raj is being approached to do a prominent character in the movie. Memory Card is expected to the Onam release for Mohanlal.

After the grandiose reception at box office with Mayamohini, director Jose Thomas and Dileep are gearing up for their next project. The interesting fact is that the movie is scripted by Sibi K Thomas –Udhay Krishna who are currently working with it at Munnar. This untitled movie which will be a clean entertainer is expected to start in June while another one titled 'Mathrika Thakkol' is also on cards. As his mega telugu project needs little more time for constructing the sets and other works, Dileep is expected to join the team in September. Meanwhile Dileep's Nadodi Mannan would reach the theatres much before Onam. Heard from the grapevine, Asin is to make a comeback in malayalam through this movie. This Dileep movie is produced by Jayson Elamkulam.

Even though it is too early to tell about the other Onam releases, a couple or more movies would be released during the season. Two projects of Mammootty are currently under making which would reach theatres before Onam.