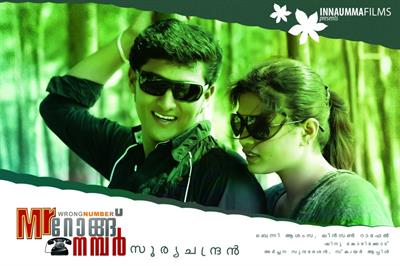 With a number of movies directed by debutant directors undergoing production, Surya Chandran's Mr. Wrong Number featuring new face Shibin George and Alphy is gearing up for release. Surya Chandran has also written the story and the lyrics too.

Benny Asamsa served as the cinematographer and Saju Eloor has composed the music for movie. 'Mr Wrong Number' deals with the problems created by the missed call to a cell phone.

Jacky is a youngster who has been issued a look out notice by the police in connection with the murder of an eight year old girl. The police couldn't reach Jacky or even collect any details about him. During the investigation, the police come across three women who were blackmailed by Jacky.

It was also found that a 50 year old homosexual man was also blackmailed by Jacky. After days of inquiry the police arrested Jacky. But many unexpected truths were unwrapped later which really surprised all. The women who had alleged of being blackmailed were responsible for their fate.

New face Diyono and Alphy John would give life to Jacky and Nimisha respectively. More interestingly, actor Siddique has rendered his voice for a song. The song which starts like 'Padumbool Neeyente Kuyila' is the first solo song sung by Siddique.

The first quarter of 2013 had witnessed the release of 60 malayalam movies. Even though the success rate is very less, the arrival of new film makers is the positive sign for the growth of malayalam film industry. As most of the directors are much aware about the change in the attitude of enjoying movies, much effort is taken to mould the story according to the taste of the movie enthusiasts.

Let us wait and see the fate of Mr.Wrong Number as it reach the theatres.