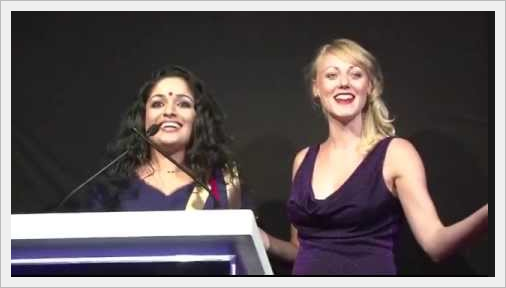 English language is widely accepted as an international language which can be used to convey thoughts. This language comes to comfort while facing a function attended by people belonging to various countries.

Kavya who had made a good start and further stated that it was her first experience and that she is not comfortable speaking in English. She had done the job neatly and thanked the dignitaries at the function for inviting her to the event. With the permission of the guests, Kavya switched over her rest of her speech to her mother tongue, Malayalam.

It was much visible that the actress was little bit stressed not getting words during the speech. Any way the video showing her speech has become the talk of the town and a topic for discussion among the pundits among social networking sites. Some favoured Kavya while other attacked for her lack of confidence in speaking English.

Any way the video will shut the mouth of those who had been criticizing her without knowing the fact. Any way mimicry artists who were looking forward a new theme were stuck by the speech which is currently replicated on stages. Kavya during her speech did interact with the foreign anchor and took the audience in her hands by singing a song from the movie 'Meesa Madhavan'.

Kavya Madhavan is one of the lead actress in malayalam who has shown her acting skill on screen in a number of movies. She will be soon seen in Amal Neerad's project 'Anju Sundarikal' while is nearing for release in June.