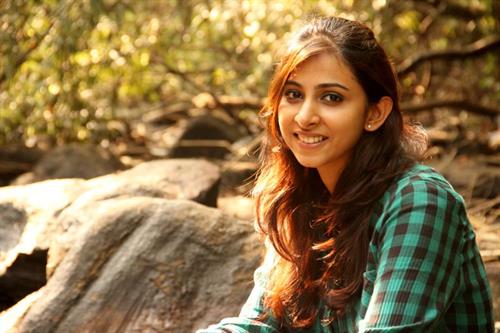 It would be a dream debut for Melba Babu who wished to build up a career in aviation industry. The young girl is on cloud nine after making her tinsel town debut with 'Honey Bee' directed by her childhood friend Jean Paul Lal. The young actress is flooded with offers including a project from Tamil industry.

Even though her entry into the cinema world was unexpectedly, she enjoys the appreciation given by people after watching Honey Bee. But the actress is not ready to keep her foot back from aviation dream which is much treasured for her.

As Melba's family was much close with Lal and his family, her parents didn't think twice to grant permission to act in the movie.

Quite excited after being recognized, Melba had done modeling for commercials which gave a safe landing in the movie which is running successfully. Doing her primary education at Thrissur and Kochi, Melba completed her schooling from Indian School Al Wadi Al Kabir Muscat.

After finishing BBA from Madras University, Melba had done a course in aviation from the Kingfisher Training Academy in Kochi. Wishing to keep her foot strong in the film industry, Melba also hopes to share screen space with Manju Warrier.

More interestingly, this young actress was really bowled out by the muscular acting capability of Mammootty and Fahadh Faasil.

Keeping her shoulders high after getting high credit for her screen presence, Melba is really confused to choose a career. As she had completed the aviation course to channelize a good career for her, the stardom and popularity which can be gained from the film industry may not keep Melba away from cherishing her dream.

Honey Bee, the directorial venture of Jean Paul is doing well business at the box office which is creamed with fun and entertainment. This movie has not only gifted a talented film maker but also a handful of youngsters who are to show their real power of silver screen in the near future.