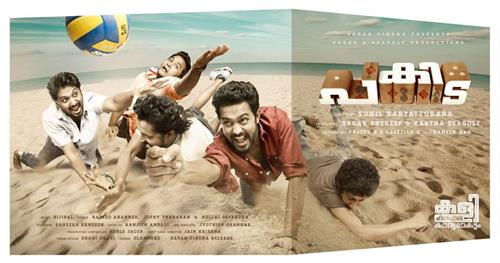 Young superstar Asif Ali who has found his own space in malayalam film industry is getting busy nowadays. After gathering a handful of projects to be completed in 2013, Asif has signed his next which is touted as an intense journey creamed with fun at its best. Titled 'Pakida', this movie will be the second outing of Sunil Karyattukara as director.

Along with a couple of youngsters, Biju Menon has also roped to play the lead role. Produced by Sagar Shereef and Kartha Seagulf, the Story, Screenplay and Dialogues are carried out by Sreejith N and Rajesh R. This ultimate fun rider creamed with humour will start rolling soon. The first look poster designed by Old Monks has already hit the social media sites.

It is much interesting to see many youngsters in front and behind the camera who are ready to give life to their dream. Sunil Karyattukara made his presence in the industry with Chacko Randaaman. The 2006 release 'Chacko Randaaman' starring Kalabhavan Mani, Mohini, Jyothirmayi, Vijayaraghavan was well received at the box office.

After taking a break, Sunil is back in business, this time teaming up with youngsters for 'Pakida'. Much interestingly, Sunil is also the producer of upcoming movie 'Olipooru'. Afsal, Sunil Karyattukara and Sudheer Cotton world will be producing this flick under the banner Round up Cinema.

Old Monks, the highly professional designers in Kerala is taking a new role other than designing the titles and posters. Sreejith N and Rajesh R of Oldmonks are lending their support writing the story, screenplay and dialogues. The first look posters designed by Old Monks featuring the lead actors' keep the wave high.

The announced projects of Asif Ali are Red, Driver on Duty, Safari, Koothara, and To Noora with Love. So get ready to welcome yet another fulfilled movie having all the essence of a complete entertainer.