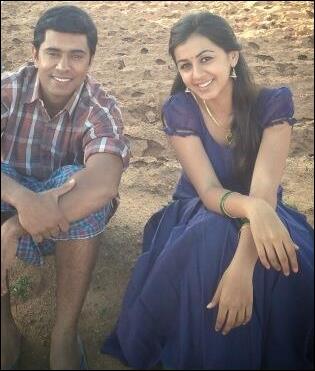 Professional photographer Abride Shine is making his directorial debut with the movie titled '1983' which pools into the personal and professional life of a cricketer which is being characterized by Nivin Pauly.

Abride did not have to search much for his first heroine as he found Nikki Galrani suitable to take up the role. Bangalore girl Nikki will have more releases in 2013 including projects in Tamil and Kannada.

She has already started the shooting of her Kannada movie Ajith which is the remake of the tamil film Paiyya. Her upcoming tamil project is Yagavarayinum Naa Kakka with Aadhi in lead. Much interestingly Nivin Pauly is considered to be the luckiest pair for new faces as all of them has created their own space in the industry.

Esha Talwar, Namitha Pramod and now Nazriya have become busy bees. Now it is the time for Nikki Galrani to try her luck pairing with Nivin Pauly. Nikki Galrani, the younger sister of actress Sanjjanaa has already made huge fan followers in Kannada and Tamil.

With the shooting of the movie wrapped up with just a couple of songs pending to be shot. Anoop Menon and George Gregory will also be donning important roles in the movie. With the post production works over, '1983' is expected to get released in August.

Nikki Galrani, a born talent carries a vivacious persona which would lift her to stardom is the very near future. Having a graduation in fashion design, this 20 year old girl started her career with modeling.

Excited to work under big banners, Nikki would like to thank her sister for her way to the filmy world. The young actress who wishes to work with Vijay and Dhanush in future wants to do experimental roles.

Meanwhile actor Nivin Pauly who has gained popularity in Tamil Nadu too with the super success of Neram has a number of movies in kitty including Arikil Oral, Motorcycle Diaries, Last Supper and Om Shanthi Hosanna paring with Nazriya Nasim.