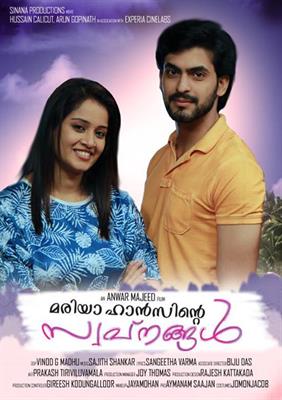 To be credited as the first malayalam movie shot completely in an houseboat, Maria Hansinde Swapnangal is currently progressing in Vembanad Lake. Directed by debutante Anwar Majid, the movie will have 14 new faces would be stepping into the industry hoping to create a space of their own. Shebi Shaukath, Saya, Suhaib Sherif, Anwar Majid and Arun would give life to prominent characters in the movie.

All the actors in the movie have been selected after an audition conducted through Facebook. The movies pools into the life of a young girl Mariya Hans who wishes to live accordingly like hollywood movie Titanic. Being highly attracted towards the movie, Mariya dreams her lover Shahid Sultan as Jack, the hero of Titanic.

As Mariya's parents giving less consideration to her interest, she dreams about Jack and Rose who lost their life in the sinking of Titanic. She plans to bring an end to her life by planting a bomb in a house boat.

Rest of the story takes the movie enthusiasts to the next phase with some interesting events to be followed later. Hussain Calicut and Arun Gopinath have produced 'Maria Hansinde Swapnangal' under the banner Sinana Productions and also in association with Xperia Cinelabs. For the lyrics of Sangeetha Varma, the tunes are set by Sajith Sankar. Vinod G Madhu has stayed behind the camera as the cinematographer.

A long line of projects are under making which aims at the young generation movie lovers. 'Maria Hansinde Swapnangal' is expected to deliver a new experience for the movie enthusiasts who wish to enjoy their time watching those movies which could keep them intact. This movie will also give ample opportunity for young actors to deliver their talent on big screen.