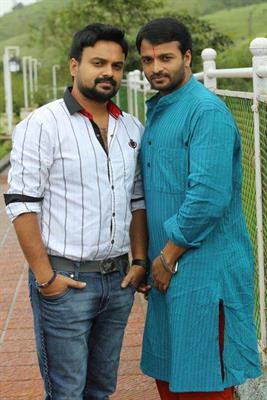 Movies like Dosh, Kilukkam Kilukilukkam, Lollypop, Four Friends, 101 Weddings, Gulumal and Poppins have something in common. What special is that, young actors Kunchacko Boban and Jayasurya have shared screen space in the above movies. Much interestingly, the lucky pairs are teaming again for yet another project designed by popular director Vaisakh. The movie titled 'Locals' is scripted by Sethu who has already shown his mettle through his previous ventures.

Kunchacko Boban and Jayasurya would give life to two men who make the wedding mantaps. They go to wedding and make mantaps. Sometimes they make wedding happen while sometimes they intend to do things which makes a marriage not to happen.

The story pools into some interesting incidents connected with four men which takes the movie to the next phase. Creamed with humour, 'Locals' would be a visual treat for those looking to make their time entertained. Suraj Venjanramoodu will also be seen in an important role in the movie. Vaisakh Rajan has produced the movie under the banner Vaisakh Productions. The shooting of Locals is progressing in Kunnamkulam.

As Jayasurya and Kunchacko Boban have shared a very good chemistry onscreen, much expectation is on their upcoming project. Gulumaal is a perfect example which was much enough to know their acting brilliance. With the duo is back again through 'Locals', the expectations of the movie enthusiasts is on the peak.

Kunchacko Boban is riding on high with the success of his Pullipulikalum Aattinkuttiyum while Jayasurya had given a good performance in the movie D Company. The upcoming movies of Kunchacko Boban include Katha Veedu, Konthayum Poonoolum and Polytechnic, How Old Are You and Motorcycle Diaries. Jayasurya is currently busy with the shooting of Punylan Agarbattis while his upcoming movies include Seconds, Philips and The Monkey Pen and 97 Batch Maharajas.

jayasurya is the best acter in this film.he is more atractive in here