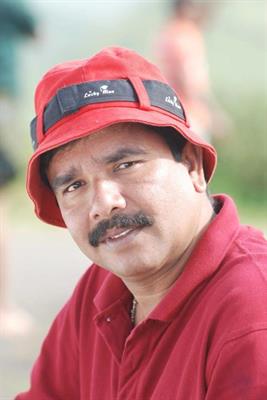 Adding more to the revolutionary changes that happens in the malayalam film industry, a long line of innovative themes are getting ready to entertain the movie enthusiasts. After a couple of movies portraying the ecstasy of the motherhood on silver screen, debutant Anil Gopinath is gearing up to showcase the story of a pregnant man.

Titled 'Garbha Sriman', the movie narrates the life a man who carries a foetus for 45 weeks. Even though the story is said in a humorous way, the director says that it would not be a lighthearted one. Anil who had been associated with the industry for the past years as cinematographer is highly ambitious about his maiden project.

Inspired from a story from the Puranas, the director would add some revolutionary happenings based on scientific facts which may happen in the coming years. A story in the Puranas tells about a member of a royal family who who fails to blessed with a child even he marries seven women. With worried mind, the royal approaches a Maharshi who gives him holy water to be drunk by his wives.

At some point of time, the royal who felt thirsty drinks the water which makes him pregnant. The kid was taken from the stomach of the royal later. Anil while taking a travel by the train thought of making a movie with would focus on the theme of male pregnancy.

After taking with gynecologists, Anil found that a male can technically carry a foetus for 45 weeks. Even though a male can carry a child, as he cannot deliver a child the director would add cinematic touch to turn the movie into a fantasy film incorporating all scientific facts.

Anil as a debutant is finding difficult in get a prominent actor to don the lead character. As the subject is very risky, the director is waiting for a brave heart man who could take the lead role. So who would don the lead role and take a lucky break? Let us wait for it.