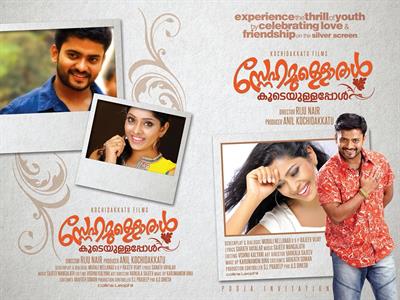 With lot of opportunities on the way, yet another youngster is gearing up to create his own space in the malayalam film industry. Riju Nair who has worked behind the screen for many projects is becoming an independent film maker with 'Snehamullaoral Kodayullappol'.

Manikuttan who has made his screen presence with Vinayan's 'Boyy Friennd' has shown his mettle in acting with a number of movies. Manikuttan kept his charisma alive in movies like 'Mayavi', 'Chotta Mumbai', 'Elsamma Enna Aankutty', 'Doctor Love', 'Thattathin Marayathu' and 'Hotel California'. 'Snehamullaoral Kodayullappol' creamed with romance, thrills and songs will have all the essence to keep the movie lovers intact.

With a long line of movies under preparation, malayalam movie enthusiasts would be getting more choices for getting entertained. As the interest of watching movies is changing day by day, movie makers are trying their best to incorporate the latest technology which could deliver the real visual treat.

The coming month would be best for the film industry as a handful of movies are undergoing its final touch to reach theatres on time. The biggies among them are Mammootty's 'Silence', Mohanlal's 'Drishyam', Suresh Gopi's 'Salaam Kashmir', Asif Ali's 'Bicycle Thieves', Dulquer Salmaan's 'Salala Mobiles' and many others.