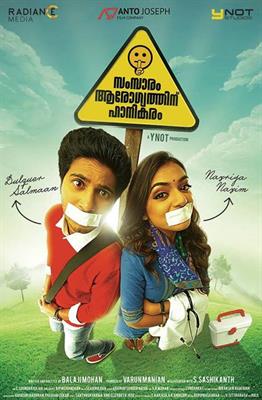 Nazriya Nazim who made her presence on small screen at a young age is currently the busiest young actress in south India. After being a part of a couple of movies as child artist Nazriya had become a prominent figure in malayalam film industry. After acting in 3 tamil movies, Nazriya was surrounded with projects helmed by established film makers. At the peak of her acting career, the actress is all set to marry Fahadh Faasil. Her committed projects in 2014 include Bangalore Days, and couple of untitled ventures with prominent directors.

Bangalore Days is a big budget movie which is all set to entertain the movie buffs. This complete family entertainer directed by debutant Anjali Menon will have features Dulquer Salmaan, Fahadh Faasil,Nivin Pauly, Nithya Menen, Nazriya Nazim, Parvathi Menon and Isha Talwar in lead roles. Vijayaraghavan, Kalpana, Maniyanpilla Raju and Sajid Yahiya will give life to other prominent characters in the movie.

This movie is about the life of three youngsters who crossover from Kerala to Bangalore having high dreams to explore the unidentified. The movie made with a budget of 8.5 Crores will have quite a number of thrilling moments. 'Bangalore Days' is blessed with the presence of Gopi Sunder who has set the tunes for this fun filled entertainment. Shot in Ernakulam, Banglore, Pondicherry, Chennai and Hyderabad, the movie will reach theatres on 9th May 2014.

Samsaaram Aarogyathinu Haanikaram is another exciting movie which has already become talk of the town. This romantic movie creamed with humour is directed by Balaji Mohan. After Salala Mobiles, Dulquer Salmaan and Nazriya Nazim would share screen space once again. Madhoo, Maniyanpilla Raju, Dinesh Nair, Chemban Vinod, Arjunan, John Vijay, Ramesh Thilak, Nandan Unni and Vinu Chakravarthy have also give full support to the movie with their respective roles. This movie will also mark the return of Madhubala after a short gap.

Produced by S Sashikanth and Varun Manian, the movie is a science fiction simultaneously made in Tamil and Malayalam. Its tamil version is titled as 'Vaayai Moodi Pesavum' which means Speaks with a closed mouth. Nazriya plays the character role of Anjana, a doctor by profession while Dulquer Salmaan would give life to a radio Jockey, a person who falls in love with Anjana.

For the lyrics of Santhosh Varma and Anu Elizabeth Jose, Sean Roldan has set the tunes of the movie. Soundararajan has stayed behind the camera as the Director of Photography. This bilingual movie will reach theatres on 25th April 2014.

Other Upcoming projects of Nazriya Nazim