After staying behind the camera as editor carving a number of hit movies, Bijith Bala is all set to taste the sweetness of direction too. A man of strong willpower, Bijith turns as an independent director with the movie titled 'Nillikka' which comes along with lot of specialties.

As with the title, the story of the movie too carries the freshness and magnetism which is creamed with music and humour. As gooseberry, which has bitterness in the initial stage and later syrupiness provides nostalgia to the malayali hearts; this movie will definitely cool their minds. Touted as a musical family entertainer, the movie is packed with music, love and cacophony of two generations. 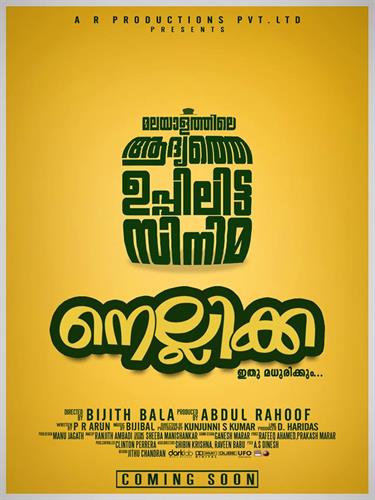 Nellika revolves around the story of Balu who is a die-hard fan of Bob Marley. Incidentally his father is an ardent fan of M S Baburaj, the renowned composer-musician from Calicut who still lives in the minds of millions of music lovers. An attempt in made by the filmmaker to trace the events set against the backdrop of Baburaj's music.

Scripted by P R Arun, the movie is set on the backdrop of Kozhikode while the movie narrates the story of two generations of people from Kozhikode. It also celebrates the friendship between two brothers-in-laws. Music and romance has much to do in the movie. The movie is being produced by Abdul Rauf under the banner of A R Producers.

Deepak Parambol, Vineeth Sreenivasan's discovery who made his presence alive in the malayalam film industry with his splendid performance in Thattathin Marayathu will be in the lead while Sija Rose plays his lady love. Atul Kulkarni know as one of the best supporting actor in bollywood is another star attraction of the movie who plays the role of a bank officer while Parveen, Meera Nandan, I.J.P. Anand, Sunil Sugatha, Grigari and Mamukkoya will be seen in other prominent roles.

Well-known journalist Sashi Kumar who has already acted in a couple of movies will give life to an important role in Nellikka. He plays 'Haridaasan', a diehard M S Baburaj fan from Calicut. The viewers will get to watch the visual beauty of Calicut which they haven't seen before.

With many unexpected twists and turns, the movie will be new experience for the fun loving movies enthusiasts. This would also be an opening for young cinematographer Kunjunni - the son of ace cameraman, S Kumar. Bijibal, who has set the music tried to give much care in composing it which would give a nostalgic feel to the music aficionadas. After the post production works, 'Nellikka' would reach theatres very soon.