The most anticipated malayalam movie of the year 'Mr Fraud' is gearing up for its release. The project helmed by scriptwriter and filmmaker B.Unnikrishnan will be yet another visual treat for the movie lovers. B.Unnikrishnan, who has already shown his mettle, is up with an interesting project with Mohanlal in lead. After the grand success of Madambi and Grandmaster, the duo has joined for yet another flick which is being produced by A.V.Anoop under the banner A.V.A productions. 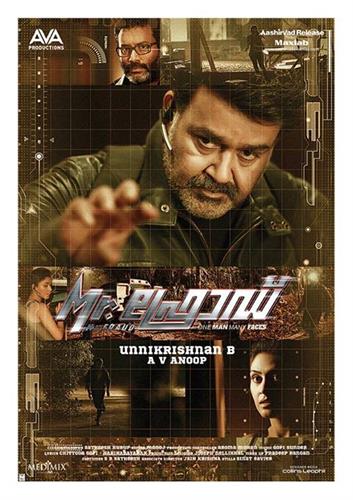 Touted to be a suspense thriller, the movie is in the back drops of ancient palace which had immense power during its reign. The children and grand children of Mahadharan Varma and Rajadhara Varma are currently staying in this palace. Ram Varma, Srikrishna Varma, Rakashekara Varma, Balarama Varma, Thrivikraman Varma, Sudha Varma are the prominent among them who are mighty and have great influence in politics too. During the time, a serious issue develops in the palace which could not be solves by the family members and their well-wishers.

As they couldn't find a solution for the crisis, an anonymous person from Delhi arrives to the palace. He who was not ready to tell his name or identity was accompanied by two; Priya and Abbas. But his influx not only unravels the problem, but boosted its gravity. His presence took the peace of mind of the inhabitants. Rest of the story passes through some interesting twists and turns which could keep the audience intact.

Mr Fraud, which comes with an interesting tagline 'One Man Many Faces', would unquestionably be a suspense thriller from the hands of B. Unnikrishnan who knows the pulse of the viewers. Manjari, Miya and Pallavi Purohit are the lead heroines which would have much to perform in this movie.

Dev Gill, Vijay Babu, Rahul Madhav, Ashvin Matthew, Arjun Nandhakumar, Vijayakumar, Sai Kumar, Suresh Krishna, Sathaar, Devan, Gopi Sundar (cameo appearance) and Rajeev Parameshwar will give life to other prominent roles. For the lyrics of Hari Narayana and Chittor Gopi, the soundtrack and background score were composed by Gopi Sunder. Satheesh Kurup stayed behind the camera as the Director or Photography (DOP). This big budget movie is expected to reach theatres on 17th May 2014.