After, My dear Kuttichathan which put forward the 3D revolution in India, there had been a number of movies released which were highly packed with content to entertain the audience. Film makers who know the pulse of the spectators come forward with innovative thoughts which could really be a stepping stone for yet another interesting change as far as filmmaking is concerned. 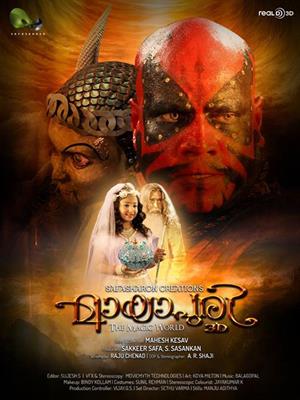 The latest to join the league would be 'Mayapuri 3D', made for the movie lovers which is expected to reach theatres by June 2014. Directed by Mahesh Kesav, the movie which have Kalabhavan Mani and Esther in lead characters is blessed with the presence of Jagadheesh, Nishi Govind, Sasankan,Ramzan, Alfas, Aadhil Muhammed and Krithika Suresh.

The story of the movie revolves around Adithyan, he only son of Sreekanth and Sruthi, a couple who lives in the city. With his ingenuity and intelligence Adithyan excels all other boys of his age. Adithyan did had an extra ordinary ability; a special sensory perception to forsee things and events which would happen in the future.

As some of the things that he had seen much earlier become reality. Adithyan is currently at his own village along with his parents ready to enjoy their summer vacation at his ancestoral home, the old and famous 'tharavadu'.

Adithyan saw dreams about the tharavadu where his grandpa and a magical world once existed. As he reached there, he found some mystery in it. His parents returned to the city leaving him near to his grandmother. Here, Adithyan finds friendship with Lachu, the daughter of the maid-servant. From his grandmother and Lachu, Adithyan understand about the village, especially about the disappearance of little children.

During one night, he happens to enter into the garret, without the knowledge of his grandma. During his curious inspection inside the room, he finds a book named Mayapuri kept in deep secret by his grandpa. He opens the book and learns the content which has him an insight about 'Mayapuri'. As both Adithya and Lachu decided to unveil this mystery, the story takes a differ path with exciting twists and turns.

With a budget of 9.5 Crores, the movie is produced by Sakeer Safa and S. Sasankan under the banner of Safa – Sheron Movies. 'Mayapuri 3D' which comes under the genre of fantasy will have 15 dwarfs and is primarily centered on children. The movie to be released in Malayalam, Tamil, Telugu, English and Hindi is expected to be a visual treat.