Anand Unnithan, known as an activist, filmmaker and writer is gearing up to helm his first feature film which is tagged with lot of specialties. Titled 'Smrithi', the movie written and directed by Anand Unnithan is a journey into the life of a young man born and brought up in a slum. Being a movie would interact with the viewers only through visuals as it has no dialogues. 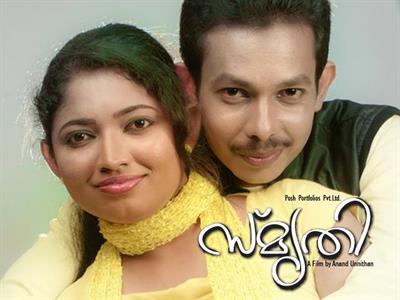 'Smrithi' narrates an exciting story of a person who passes through various stages in life. Born in a blighted area, his journey from nothing to everything in life finally faces the unavoidable end of life. His perception of the past at the moment of death will form the crux of the movie. Themed around love and loss, Anand Unnithan will give life to the central character.

Unlike the conventional visual language used in malayalam film cinema, the director will try to use P.O.V shot (Point of View shot), which would be the second to be used in the industry after 'Anabella'.

POV shot also known a subjective camera is partially used in few movies for some sequences. The viewers would witness the events through the eyes of the actor and feel like experiencing the events themselves.

POV shots were extensively used by Alfred Hitchock for narrating stories in his movies. The technology was widely used in the Hollywood movie 'Gravity' with shots from inside the inside of an astronaut's helmet adding more excitement for the viewers. New face Adithya Menon would make her acting debut through this movie.

Sandhya Iyer, Ramesh Valiyashala, Munshi Ranjith, Ramapuram Chandrababu and Sinu will give life to other prominent characters. 'Smrithi' is produced by K A Unnithan under the banner of Posh Portfolios Pvt. Ltd. The camera is helmed by Bineesh Edakkattil and the tunes are set by D. S Rajiv. With Thiruvanathapuram as the main location, the shooting is expected to start by the last week of May.