The Kerala Plus Two results 2014 was announced a week ago with a total of 2.78 lakh students becoming eligible for higher studies. A pass percentage of 79.39 were recorded in 2014. As per the notification of the Kerala Higher Secondary Examination Board, the Higher Secondary SAY and Improvement Examination 2014 will commence from 03.06.2014.

The SAY Examination is being conducted for those regular candidates who had registered for the Second Year Higher Secondary Examination March 2014, but failed to become eligible for higher studies. Such candidates can register for those subjects in which they failed to attain D+ or above grade. The prime motive is to facilitate the person to improve in his/her grade in those subjects.
For the compartmental candidates who have secured D+ or above for five subjects and appeared in the Second Year Higher Secondary examination March 2014 can register for the one subject for which he/she failed to accomplish D+ or above grade. 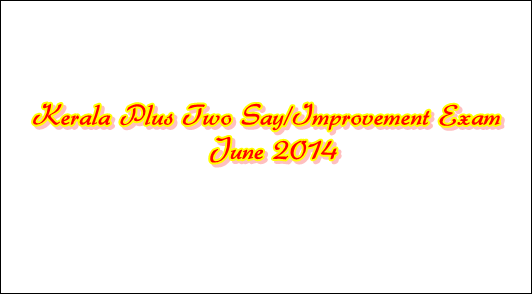 Students who are appearing for the Kerala Plus Two Say/Improvement examination June 2013 should have a regular touch with the official website education department. The list of Higher Secondary Schools selected as Examination centres along with the list of Higher Secondary Schools clubbed to each Examination centre will be accessible through the department portal www.dhse.kerala.gov.in.