Tini Tom and Guinness Pakru who have shared the stage for a number of times is all set to enthrall the audience with a movie creamed with humour at its best. Titled '6', the directed by debutante Gururaja centres around the epical characters Vikramaditya and Vethalam. Wrath, greed, sloth, pride, lust and envy are the six deadly sins ruling the mind of human beings. These six evils connected with the present generation thoughts forms the crux of the movie. 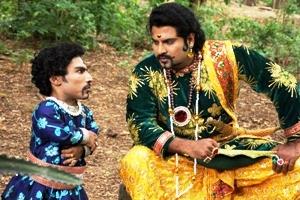 Indian being a country which had been projected as a land of tranquil and peace is much known for its rich civilization. The Indian culture has been smoothly transferred to generations. Ramayana and Mahabharatha still exist due to the bond which had been carrying out for centuries. The problems that occur in the family life of the present generation are depicted in '6'.

Yamuna (Paulomi Bhattacharya) is the daughter of a man who who works as the manager for an advertisement firm. Once Rathnam(Vimal Raj), an ad film director and the owner of the advertisement company make a visit to the house of Yamuna. Purely attracted by her beauty, Rathnam wished to get married to Yamuna. As he dearly wanted to marry Yamuna, he put forward a promise to give 20 lakh for the marriage purpose of her two sisters. Yamuna works as a typist in an institute owned by Sharma (Mukesh). As he too kept an interest on Yamuna, Sharma forwarded a blank cheque leaf giving her freedom to write an amount according to her interest. But she denied all such offers made by Sharma.

Finally Rathnam was the lucky person who gets married to Yamuna. Ashok, a friend of Rathnam was staying along with him in the same house. Even after the coming of Yamuna, Ashok continued to stay there. Ashok who was married to Rohini later divorced her. As Ashok feels love towards Yamuna, she consults a doctor (Babu Raj).

His wife Chandrika (Thejasree) who had gone with another person is now under medical treatment. As the doctor opens his life story to Yamuna, she feels that her problem is not much an issue compared to the doctor. But later Rathnam who becomes specious about the character of Yamuna thinks that she had an illegal connection with Ashok. This though of Rathan haunted Yamuna and made her mind uncomfortable which finally end in the death of him. With Yamuna being responsible for the death, the story takes an interesting twist which would keep the audience intact.

During the story sequences, Vikramaditya and Vethalam come along with question and answers which makes the story engaging. Thesni Khan, Ponnamma Babu, Sajan Palluruthy, Dharmajan Bolgatty and Kollam Ajith will give life to other prominent characters in the movie. Produced by Gururaja under the banner of Gururaja International, this movie would reach theatres by June 2104. For the lyrics of Sibi Padiyara, the tunes are set by Rabi Devendra. Najim Arshad, Pradeep Pallusseri, Rimi Tomy and Deepu have rendered their voice for the songs.