Asianet, the most popular entertainment channel in malayalam is all set to telecast the new edition of the most anticipated and witnessed award show of malayalam miniscreen industry. The Asianet Television Awards 2014 which is being initiated to honour the best programmes and technicians of the renowned channel was held on 10th May 2014 at Marine beach ground, Kozhikode. 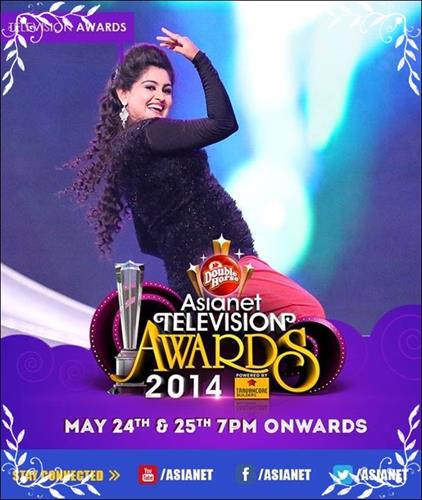 Clubbed with interesting programs, this extravagant show was witnessed by invited celebrities representing the film industry, television and others from socio - cultural spheres. A total of more than 10,000 people gathered at the Marine Beach ground to enjoy the glittering function which was creamed with fun at its best. Hosted by Kishore Sathya and Pooja, the event made colourful with the dance performances of Asha Sharath, Isha Talwar and Natasha and some skit programmes which kept the interest high.

This award night truly boosted the confidence and trust of the actors and technicians which could provide an extra energy for them to work harder to reach the channel in more heights. For the first time, the city of Kozhikode witnessed a live mega show which truly proved to be a visual treat for the audience.

The lifetime Achievement Award was awarded to Valsala Menon. While Parasparam bagged the best serial award, Streedhanam emerged as the popular serial. Vivek Gopan was declared as the best actor and Rekha Ratheesh won the best actress award. 30 awards from vivid categories were distributed by celebrities from film and socio - economic spheres. Ramesh Pisharady and Dharamajan took the show with an interesting comedy show which kept the viewers intact. The seven hour long programme was greatly appreciated by the viewers would be premiered on 24th and 25th of this month (Sat & Sun) at 6:30 pm on Asianet.