Riding on the success of winning the best actor award at the national award, a long line of movies featuring Suraj Venjaranmoodu is gearing up for release. This time Suraj is playing the lead role yet another movie which tells the tale of a young man who fears fire and the traditional rituals like Theyyam. Titled 'Pedithondan', the movie directed by Pradeep Chokli is set against the backdrops of rural locales of Malabar. 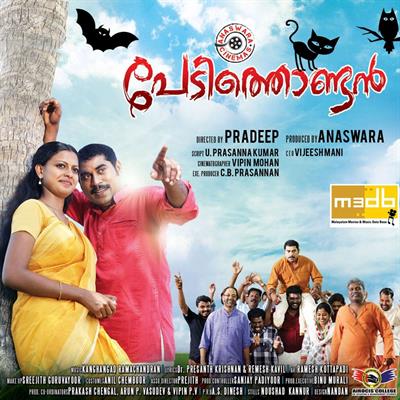 Rajeev (Suraj Venjaramoodu) is a young man who lives in a village which is known as the land of Theyyam. He is loved and cared by the villagers for his innocence and sincere love towards others. But as he fears fire and the traditional rituals like Theyyam, he even escapes from the village. Rajeev's absence creates issues in the village.

As per the traditions and customs, Rajeev has to participate in the Koodiyattam donning the Theyyam outfit. According to the belief, if it is not done, the Kavu and the related customs will all come to an end. This will challenge even the existence of nature and also the people who solely depends on it. Through this movie, the director aims to picturize an interesting theme where the villagers put a sincere effort to find Rajeev.

Anusree would be paired opposite to Suraj playing the character role of a school teacher while Madhupal also appears as a school teacher, Rasheed. Produced by Anaswara under the banner of Anaswara Cinemas the movie is blessed with the presence of Sreehari, Sivaji Guruvayoor, Nuriya, Ullas Pandalam and Binu Adimalli in prominent roles. The story, script and dialogues are penned by U Prasannakumar while Vipin Mohan stayed behind the camera as the cinematographer. For the lyrics of Ramesh Kavil and Prasanth Krishan, the tunes are set by Kanjiragadu Rama Chandharan. The movie was completed at Madayipara in Kannur.