Vinod Mankara who made his presence alive in the malayaalm film industry with the movie 'Karayileekku Oru Kadal Dooram' is gearing up for his next outing. Tilted 'Otta Mandaram', the movie visualizes the sufferings in the life of a 15 year old young girl Kala. Bhama gives life to Kala, a powerful role that she has got in her life time. 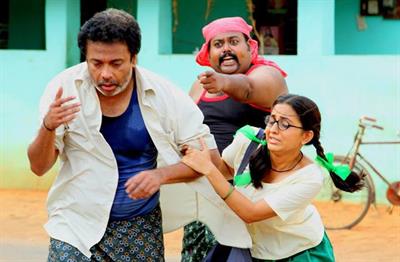 The movie is themed around the life of Kala and her agony which she had to face during her life journey. She lives in a village thickly packed with ordinary people who work hard to earn for their daily bread. As being a village, there had been little scope for modernization. The only primary health centre and a government school give some satisfaction for the villagers. Kala, a student of this school lives along with her elder sister Neeli (Sajitha Madathil) and her husband Bharathan(Nandu).

Bharathan who works in a rice industrial unit is a person with has no big dreams. Being much helpful to others, Bharathan is respected and liked by the villagers. Even though he lives only for the family, he is unable to find happiness as the couple doesn't have a child. So they kept their days joyful with Kala brought up as their daughter. Being a studious student and good in extracurricular activates, the village kept high expectations on her. They wanted her studying well and becoming a doctor who would serve the village. Kala loved text books and invested her time for studies.

But the fate conserved for her as she was forced to marry Bharathan, her brother in law. After the marriage, Bharathan met an accident and died soon after. At the age of 14, Kala had to bear the pain of a mother while turning into a widow at a very young age. Pregnancy and depression destroyed the presence of mind of Kala who totally collapsed and had to settle in one corner of the house. As the society kept her away, she had to fight back for the survival. Rest of the story keeps the heart ticking with interesting incidents happening in the life of Kala.

Scripted by journalist Ajay Muthana, the movie is blessed with the presence of Nedumudi Venu, Kochu Preman, Narayan Nair, Kulappulli Leela, Kozhikode Sharadha, Rugmini Amma, Lishoy, Sabu Thiruvalla, Satheesh Vettikavala, Aswathy Nair and Sreekutty in prominent roles. For the lyrics of Vinod Mankara, the music is set by Ramesh Narayanan. 'Otta Mandaram' is produced under the banner Pappilonia vision. The camera is handled by Udhayan Ambady. With Nagarkoil as the main location, the movie is expected to reach theatres after the final cut.