M B Padmakumar who is much known as an actor on small screen is gearing up for his directorial debut which unfolds the deep emotional relationship between two men. Titled 'My Life Partner', the movie sheds light onto the mental attachment of two human beings. It is all about the story of two friends-turned-lovers born and brought up in different cultural backgrounds. 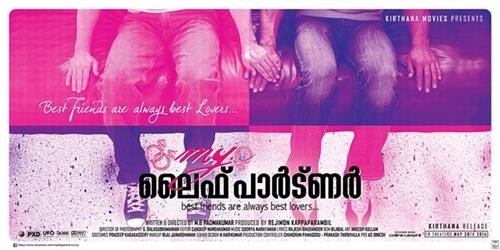 Richard (Ammer Niyas) who comes from a family having roots in business is expected to continue the legacy. Being natured under a strict atmosphere, he could enjoy the real freedom as he moves to a hostel. He finds friendship in Kiran (Sudhev Nair), a US-born child of separated parents. In course of time, their friendship grows and truly changes their life. As they were bonded each other, the marriage between a man and woman was just an incongruous joke.

During a juncture, Kiran was pushed to pass through a rough patch in life but Richard gave care and love which brought him back from the verge. They cared and loved each other and wished to share their lives too. As they found that the foundation stone of every relationship is family, they planned to add a baby to their lives. But due to the Indian laws, they was not allowed to adopt a child.

Richard was forced to marry Pavithra(Anu Sree), an orphan. But as his mind was full of Kiran, he couldn't love Pavithra. Their life goes chaotic, when Pavithra discovers Richard and Kiran's relationship. As Pavithra comes to know that she is just kept as a machine to deliver a baby, she decided to do an act. But as he gets pregnant by the time, Richard gets mentally hurt.

He consults Dr Leela Ayar(Sukanya), a psychologist who had a good reputation in the society. Richard carried some questions which he couldn't find answer. But Dr.Leela Ayer who could read the soul of others, find it difficult to manage the thoughts of Richard. Rest of the story makes the heart ticking as some interesting twists and turns happen later.

Produced by Rejimon Kappaparambil under the banner of Keerthana movies, the movie is blessed with the presence of Gopan Karunagapally, Sudhakaran, Geetha Vijayan and Valsala Menon. For the lyrics of Rajesh, the tunes were set by Surya Narayanan while Aravind Venugopal, Gayathri and Abhirami have lent their voice for the songs. The movie was completed at Thiruvalla. After the final cut, the movie is slated to reach theatres on 6th June 2014.