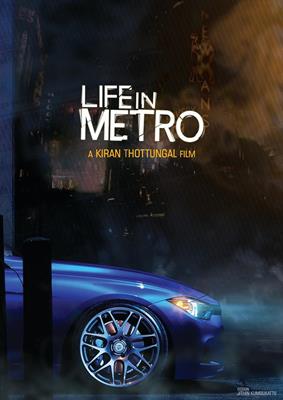 Kiran Thottungal who is trying hard to find a space in the malayalam film industry is gearing with the directorial debut 'Life in Metro' which is touted as a suspense thriller. The movie is themed around an office and some issues connected with the private secretary and her boss.

Being a female oriented theme, the movie tells the tale of an office private secretary who in course of time had to go to goa to solve the issues which were the concern of his boss. As her boss had to face some problems connected with his business, she was forced to reach him and find a solution. Rest of the movie with interesting twists and turns would keep the audience intact. Varsha K Pandey who is much known among the south indian film circle will play the female lead.

The pooja of 'Life in Metro' was held recently at Angamaly with a host of new faces attending it. Popular TV soap 'Kumkumapo' actor Shaanivas Shanu who is much popular among the small screen viewers would present him in a negative shade. Scripted by the director, the movie creamed with humour and is expected to be a visual treat for the movie lovers.

With Goa and Ernakulam as the prime shooting spots, the movie is being produced by Muralidharan T G under the banner of Chenkottu Films. V K Sivan is the cinematographer of 'Life in Metro'. For the lyrics of Rafeeq Ahamed, Haseena, S. Kanam and Harinarayan the music is being set by Nikhil Prabha.