M P Sukumaran Nair who has shown his mettle as a filmmaker with his previous ventures like Aparahnam, Kazhakam, Drishthantham, Sayanam and Ramanam is ready for his next outing. His innovative approach which zooms into the innermost contours of human mind makes him a perfect filmmaker.

The award-winning director is back with 'Jalamsham', a period film which is themed on man-woman relationship shown in a different angle. Set in the backdrops of 1960's, the movie tells about the socio-cultural fabric of Kerala. 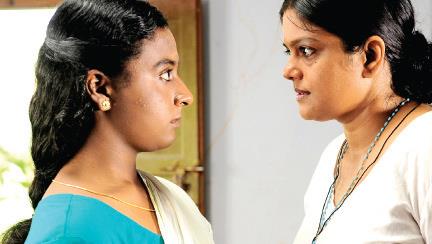 Scripted by Sukumaran Nair himself, 'Jalamsham' is set in the backdrop of agricultural societies and their customs. Kunjunje (Jagadish) is a farmer who lives happily with his wife Shobhakutty (Manju Pillai) and their two children. Due to certain reasons, he had to go to the jail. With a different mindset he returns to his home.

But the situations were totally different from what he had thought. Forced to do something which makes him land in trouble and made him to go to jail. The farmer's wife Shoshakutty (Manju Pillai), Savithri the lady landlord (Parvathy Ghosh) and a peasant girl (Reshmi) are the three strong female characters in the movie. The problems connected with urbanization and vanishing paddy fields forms the crux of the 'Jalamsham'. The movie was completely shot in the rural interiors of Kottayam.

Kunjunje in 'Jalamsham' would be one of the best character received for Jagadeesh. As his character passes through various stages from adulthood to old age, he was the perfect person to fit for the role. All other characters including Indrans, Suraj Venjaramoodu and Krishnaprabha will also get a chance to give their best performance in their acting career.

Sukumaran Nair himself is producing the movie under the banner of Rachana Films. 'Jalamsham', set on the backdrop of agricultural societies and their customs is expected to reach theatres soon.