Mohanlal Special magazine July 2014 issue has been published and is now in the stands. The highlights of the current issue will be inside stories of Mohanlal's much awaited political satire Peruchazhi. Special reports and exclusive photos of Peruchazhi and a sneak peak into his next movies 'Laila O Laila' and 'Billion Dollar Raja' will grace the current edition of Mohanlal Special magazine. 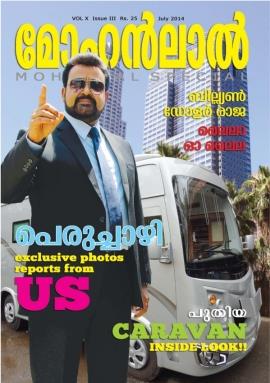 The inside view and description about the features of Mohanlal's hi-tech Caravan would keep the readers intact. It would be a rare opportunity for the fan followers to get updates about the great actor who has been entertaining him for three decades.

Like the previous issues, the July edition is also tightly packed with updates stories about upcoming projects of Mohanlal. The actor has already committed half a dozen movies with a couple in other regional languages too. 'Peruchazhi', to be credited as one of the most expensive film made in malayalam while the majority of the portions are shot in USA. A dedicated team working behind the screen has given good faith in carrying out exclusive news reports about the movie.

One of his most anticipated movie in 2014 will be the Hollywood flick 'Billion Dollar Raja' to be directed by Nayan Padrai which is inspired by the true story o Galleon Group founder Mr. Raj Rajaratnam. Soon after Mohalal's return from Brazil watching world cup football, he would join the sets of Joshiy's 'Laila O Laila'. A couple of round talks have already been made while the pre production works are going on in full swing. Readers can get a knowledge about this upcoming venture through the news in the magazine.

Mohanlal Special the one and only star magazine currently in malayalam which started publishing from 2005 is liked by malayalis around the world. Published by Newsline Publications, 'Mohanlal Special' has already become one of the most circulated film magazine in Kerala for its interesting stories and exclusive photographs of the acting magician. Published once in a month, this magazine is completely dedicated to the actor who has reached the fame of malayalam film industry among the western audience. 'Mohanlal Special' which comes at an affordable price tag would be an asset for a moviegoer.