The 62nd edition of the Nehru Trophy Boat Race to be held at the backwaters of Punnamada Lake would be an exciting event creamed with pomp and pageantry. This Boat Race will witness the gusto of oarsmen, the steep excitement of the spectators, the rippling waters and the ostentatious boats. After the blowing of whistle, the docile waters of the Punnamada Lake would become a track on fire while its silence broken by the striking oars. 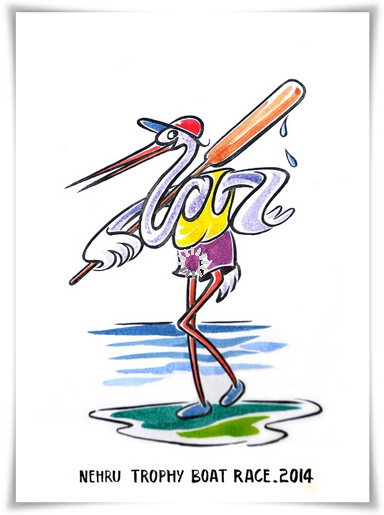 The Nehru Trophy Boat Race which is being held on the second Saturday of August every year is the most prominent boat race witnessed by people around the world. Jawaharlal Nehru, the first prime minister of India during his visit to Alappuzha in 1952 was honoured by a pageantry of boats and an impromptu race was conducted in respect of him. He donated a silver trophy to be presented to the winners which formed the genesis of the boat race.

The most important attraction would be the 100–120 foot long canoes made of a wood with 90- 110 rowers. As a number of boats moves through the channels, it forms an eye catching sight for tourists and local people. The Chundan Vallam is also credited with 'the biggest water vessel used for sports purpose'. Various popular snake boats participate in the competition. In 2014, the boat race is being held on 9th August.

Recently, the logo of the boat race was unveiled by popular actor Dileep in a glittering function held at Panoramic Sea Resort. The logo designed by V R Reghunath features a crane holding an oar. To reach the Punnamada lake, from Alappuzha railway station, its just 8 kms journey while from Cochin International Airport its about 85 km from Alappuzha town (70 minutes journey). It is very important that viewers should reach Alappuzha before 11 AM and occupy the seats. As boat services will be not be available after 12 noon, try to reach the venue as early as possible.

Tickets for viewing the boat race as fixed at Tourist Gold Rs 2000 while Rs 100 for Lake view. The tickets can be purchased from various offices as mentioned in the website.

Watch Nehru Trophy boat race 2013 live online streaming on various TV channels and websites. The live telecast of Nehru Trophy Boat Race 2013 will be available on Manorama News, Asianet News, Jaihind TV, and other local television channels while the boat race will be webcast live at the official websites. Read more to know about Alappuzha Nehru boat race and its live streaming details.