Jayasurya is blessed actor who has created his own space in the malayalam film industry through his hardwork and dedication. After a majestic year of success, the young actor will be a part of a handful of projects in 2014 itself. Jayasurya is doing the lead role in Rajishh Midhila's directorial debut 'Lal Bahadur Shastri' which will also have Aju Varghese and Nedumudi Venu donning prominent characters. 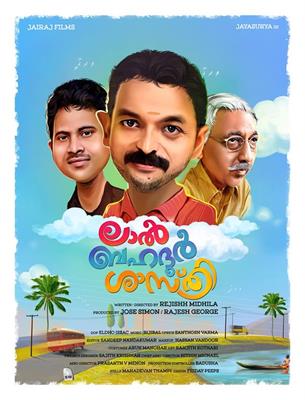 Much interestingly, Adwaith, son of Jayasurya would make his acting debut with this movie. Adwaith Jayasurya,will be seen playing the childhood of Jayasurya's character onscreen. Even though it is not a full length character, the scenes are very much integral to the story of the movie. Bring a student of Class III, Adwaith is much interested towards editing and camera works. He has already done cinematography and even edited short films using FCP software.

Adwaith has already made short films like Friendship and also acted in few others. Scripted and directed by Rajishh Midhila, Lal Bahadur Shastri revolves around the lives of three strangers, who later meet up to complete a mission in life. How they influence each other forms the crux of the movie.

Jayasurya reprises the role of Lal, Nedumudi Venu and Aju Varghese portrays Bahadur and Shastri, respectively. Sandra Simon plays the role of a middle class woman who is a nurse. The movie creamed with humour is being made giving high consideration to the expectations and interest of the moviegoers. 'Lal Bahadur Shastri' is produced by Jose Simon and Rajesh George. For the lyrics of Santhosh Varma, the music is being set by Bijibal.

Meanwhile, Jayasurya is having a good time with his career getting closely associated with a number of upcoming ventures. His character role on 'Appothicarry' has already got praise from online users. Jayasurya has already committed various projects including 'Aadu, Oru Bheekarajeeviyaanu' directed by Midhun Manuel Thomas, 'Mathayiyude Suviseshangal' and an untitled movie to be helmed by Priyadarshan. He would characterize the role of an auto driver in 'Mathayiyude Suviseshangal'.