Malayala Manorama Thozhilveedhi, one of the leading employment newspaper in Kerala has published its 2nd August 2014 edition. The current issue of 'Thozhilveedhi' is packed with a bunch of opportunities for the job seekers. The highlights of this issue are the arising vacancies in Kerala Gramin Bank, CISF, Masagon Dock, SBI, Air India, ONGC and Ordinance Factory. 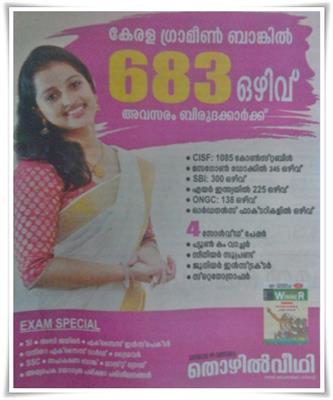 As usual special focus is given to General Knowledge as it is one of the prominent part of the all exams being conducted by the Kerala PSC. 'Thozhilveedhi' can be wisely used to gather information and also to know about the rising vacancies. As the application methodology is also described, readers can get valuable guidance to fill the forms.

So can you leave the current issue of this employment newspaper? Grab 2ndth August 2014 issue of 'Thozhilveedhi' from your nearest book vendor and grab your dream job.