After 'Chinthayilninnu Veekshanathilekku' and 'Ningalenne Congress Aakki' (You Made Me Congress), Kannur MLA Sri. A P Abdullakutty is ready with his new book. 'Marakkanavatha Macau Yathra', will be a travelogue with description about his journey to Macau Island. The book will be offcially released in at function to be held on 9th August at Alakapuri Hall, Kozhikode. 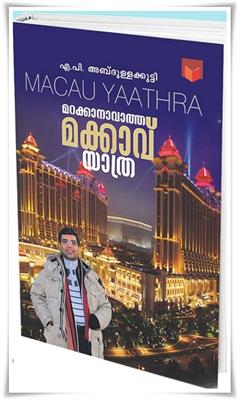 The function will be blessed with the presence of invited guests representing the cultural arena of Kerala. Santhosh George Kulangara, who is much known for his visual travelogue serial 'Sancharam' will unveil the first copy of the book. A gazal night led by popular Gazal singer P M Umbai is also being organized during the function.

In 'Marakkanavatha Macau Yathra' Abdullakutty shares his days spend at the Macau Island along with his family. Macau much known for tourism is being visited by people not to do a research but to enjoy the real life in the land. Nature in all its glory, this fascinating place has its own legal system, police force, monetary system, customs policy, and immigration policy.

Other than people from Chinese mainland, Macau attracts tourists from various countries. Through his book Abdullakutty talks about the difference in the attitude of people in Kerala and Macau. He wishes to bring changes in our system of education where schools are separated for boys and girls.

In his former book, 'Ningalenne Congress Aakki' (You Made Me Congress), Abdullakutty tried to evaluate his from three perspectives, a religious person, a revolutionist and an anti-commmunist. Abdullakutty has also written about his personal, college life, religious and ideological views in the book.

While in his autobiography 'Ningalenne Congressakki', A.P. Abdullakutty looks back at his eventful life and explains the trials and problems that he has faced as a child born in a conservative Muslim family. He has also explained his days as a young communist full of idealism and an unwavering faith in the infallibility of the communist beliefs.

Can A P Abdulla Kutty's views alter the belief of the readers? Let us wait and see.