Babu Antony, known for experimenting his looks has grabbed the attention of the online community through the Jesus Christ-like appearance in his upcoming movie. The actor who is much familiar among the malayali audience through his action sequences is ready to deliver a surprise in 'Francis Papa' directed by Simon Parakkal. 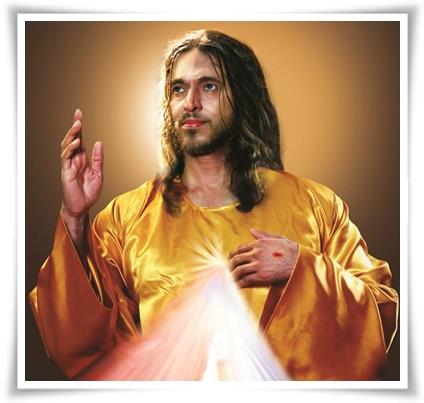 As known the movie 'Francis Papa' tells the story of a documentary maker who visits orphanages and destitute homes and confronts a life altering experience. Even though, the scripting of the movie is still in progress, the first look of the poster received overwhelming response from the social media site users.

The costume for the first look poster has been prepared by the Sisters of St Joseph Convent Kaipuzha. Simon who liked the work of the convent inmates, presented them a big framed picture of the actor depicting the look as Jesus Christ.

Truly excited to receive the picture, the sisters kept that in their prayer room. As Babu Antony posted the picture on his facebook page, he received fabulous response from his well wishers and fans community. His appearance as Jesus Christ was loved and well appreciated by the audience.

While busy with the Tamil and Telugu projects, Babu Antony was attracted towards the project for its novel approach in telling the tale. The script was found interesting and at the same time challenging which made the actor to reprise the role of Jesus. He is also planning to make his foot into Hollywood with a supporting role in the movie Bullet Blades and Blood directed by Warren Foster.

Babu Antony who has already created his own space in the malayalam film industry is looking forward to expand his reach. Some of the upcoming projects of the actor include 'Homely Meals', 'Kaaviya Thalaivan' and 'Kaaka Muttai'. He is also doing a special appearance in Sudheesh Shankar's 'Villali Veeran'. Keeping an interest in film making, the action king has also announced his dream project 'Piano', a sweet love story, with creamed with action and music.