Sajinlal, best known as serial director is gearing up to make his presence on the big screen. After his run in Television and TV ads, Sajin is leaping forward with a theme which has social relevance. The movie titled 'Crayons', featuring Boban Alummoodan and Master Dhananjay in lead has started rolling at Thiruvanathapuram. The switch of 'Crayons' was done by yester year hero Jose at a function held at the state capital. 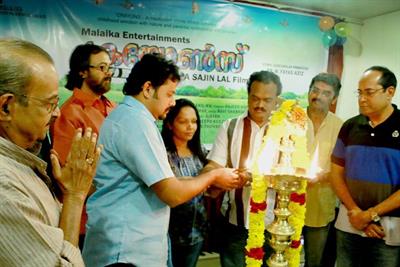 'Crayons' is scripted by Faiz while the screenplay is handled by K V Anil and Faiz. It is a family oriented movie which gives more importance to child artists. Truly made for the young generation parents, the movie zooms into the social value of giving freedom to the children in creating a real bondage with the nature rather than putting them inside the walls of concrete homes.

The life of two couples; IT professionals Prakash Dev – Anamika and worker Simon and his family is being told in an innovative pattern. Creamed with humour, the movie will have thrilling moments and beautifully visualized songs. For the lyrics of Chunakkara Ramankutty and M K Sreekumar, the music is set by Ravishankar. The camera is being helmed by Rajiv Vijay.

Dineesh Panikkar, Sangeetha Becker, Master Sabarikrishnan, Master Sibin Zacharia (Balaganapathy fame) and Devisree will give life to other promienent characters in the movie. 'Crayons' is being produced by Dr Faiz Aseez and Saneena under the banner Dream Desert Films. With Thiruvanthapuram and nearby places as the locations, 'Crayons' would reach theatres as a summer treat.

After getting featured in 'Trivandrum Lodge' and 'Daddy Cool', Master Dhananjay is donning a prominent role in 'Crayons'. As movies made for children are greeted by the audience, the makers too aim to deliver a visual delight through 'Crayons'. As many child artists are featured in this movie, it would give a great opportunity for theme to perform on silver screen.