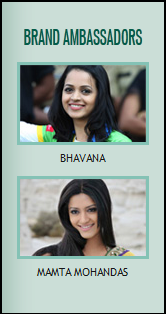 The Celebrity Cricket League (CCL) with film actors representing various film industries started in 2011 with four teams rose to popularity fetching television viewers more than One Day and T20 matches conducted by International Cricket Council (ICC). The CCL which had been watched globally by people through television in 2011, continued to get advantage of online websites and CCL official channel in 2012 which streamed matches live. Started with 4 teams in 2011, the CCL had been conducted with professionalism and sprit in the following year with 2 teams more added making it 6 in total. Inspired by the Indian Premiere league, the CCL will continue its journey in 2013 too with 2 more teams getting into the roll making it 8 in total.

Kerala Strikers representing malayalam movie industry which made a grand take off in the previous season is packed with heavy guns captained by Padmashree Lt. Col. V. Mohanlal. The team has made a total revamp with 8 new players added to the side. The cricketing fans are excited to watch the fireworks of Rajeev Pallai who had created waves after his majestic performance in CCL matches. Rajeev who was known only among the fashion circle grabbed the eye balls of the country getting a handful of opportunities in movies ranging from Malayalam to bollywood. The actor will soon be seen along with Vijay in an upcoming tamil movie too.

The 2012 edition which was wrapped up on 12th February at Hyderabad saw Chennai Rhinos emerging as the winner after defeating Karnataka Bulldozers in the finals. At a press conference held on 19th October at Mumbai with Sohail Khan, Sarath Kumar, Mohanlal, Suniel Shetty and Riteish Deshmukh, Bipasha Basu and Priyamani present, the new edition of the CCL was announced. The next CCL will have a blasting season conducted from 13th January to 13th February 2012. Salman Khan, an actor cum popular Icon would miss the current edition but would be a part of the team visiting the venues and cheering the team. Veer Marathi representing the Marathi Film Industry and Bhojpuri Dabbangs representing the Bhojpuri Film Industry will be the new comers added up to season 3.

Here is the complete list of players, industry, state, captain and team owners for CCL 2013. 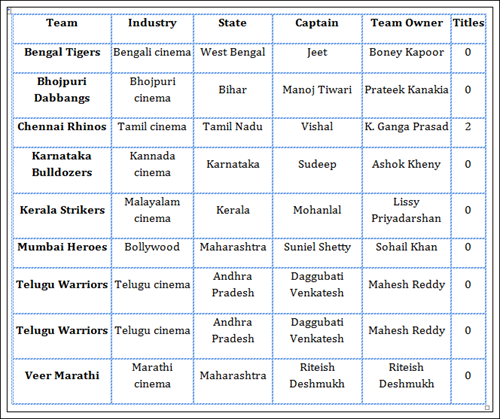 Mohanal will continue as Captain while the team will have 8 new players added to the 2013 edition. Bhavana and Mamta Mohandas will be the brand Ambassadors. The team has started the practice sections on 27th December headed by chief coach Pankaj Chandra Senan. Here is the complete information about the team.

The CCL 3 or the third edition of Celebrity Cricket League will comprise of eight team. The curtain raiser event will be held at Mumbai on 19th January 2013 which will be the platform for introducing each team with the presence of Bollywood celebrities performing on stage. In the opening match held at 9th Feburary 2013, Kerala Strikers will take on Mumbai Heroes.