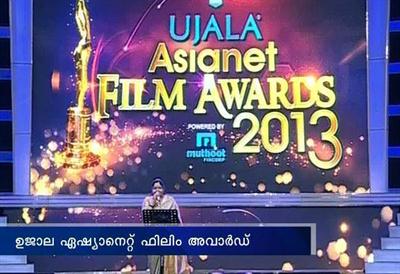 20th January 2013 was a memorable day for the malayalam film fraternity and also to thousands of people gathered at Wellington Island, Kochi. The stage was set for Asianet Film Awards 2013 which witnessed the presence of eminent personalities who had kept the show alive with their presence on stage. Attended by the popular artists representing malayalam movie industry was blessed with the presence of Kamalahasan, Mohanlal, Mammootty and others.

This mega show was a visual treat which brought dancers, singers and comedy artists onto a single stage. Among the awards, Mohanlal won the best actor award for his majestic acting in Grandmaster and Spirit while Usthad Hotel won 3 awards including the best film in 2012. Kavya Madhavan was declared as the best actress for Bavootiyude Namathil while Vineeth Sreenivasan won the special multi talented personality award for his movieThattathin Marayathu. Actor Jayaram received the special commemoration for his presence in the industry for the past 25 year.

Here is the list of the winners of Ujala Asianet Film Awards 2013.