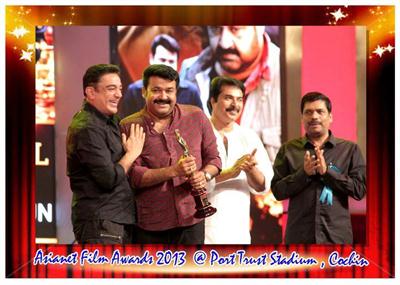 Asianet Film Awards initiated by popular malayalam channel Asianet and co sponsored by Ujala is a prestigious award ceremony held annually to honour the best in the malayalam film industry. For the excellence shown behind and in front of the camera during the year is considered for the award. As Asianet started broadcasting this award function from 1998, the ceremony gained much popularity gathering huge viewers. Being a unique platform to watch the celebrities together, the viewership rises up every year.

This year too, Ujala Asianet Film Awards 2013 held at Port Trust Stadium, Willington Island Cochin was a high- flying show with the presence of key personalities representing the film industry. With the presence of more than 25,000 spectators, the award night was a glittering event which acknowledged and honoured the best in the industry for their performance in 2012. Other than those representing the film industry invited guests were also present during the occasion.

Universal Star Kamala Hassan who was the chief guest during the mega show was felicitated combined by mega star Mammootty and Asianet Managing Director K.Madahan for delivering exceptional contributions to Indian Film Industry. The extravagant event brought the stars from South Indian film industry onto to a single platform. Coloruful programmes were arranged which include the artistic performance by the leading malayalam actresses including those of Honey Rose, Meera Nandan, Mythili, Shamna Khasim and Archana Kavi.

'Usthad Hotel' won awarded as the best film in 2012 while Ranjith was credited the best director for the movie 'Spirit. 'Mohanlal won the best actor award for his unsurpassed role in 'Spirit & Run Baby Run' while Kavya Madhavan's natural role in the film ' Bavoottiyude Namathil made her the best Actress. "Spirit "won the award for the best popular film for the previous year.