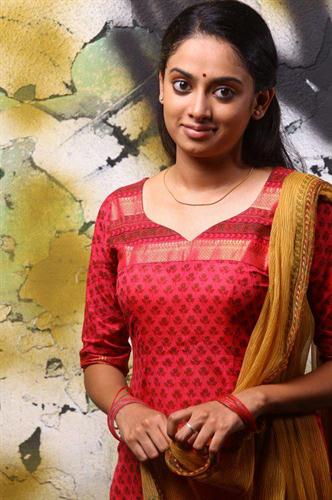 Gauthami Nair, the girl with the beautiful eyes is familiar to all of us. She hails from Alappuzha district, Kerala but had spend her early life in Kuwait. She was born on 13th November. Gauthami is a smart young talented actress who became quite famous within a short span of time. She entered the Malayalam film industry in the year 2012. Her first entry was as a heroine itself. She has acted with many young generation heroes such as Dulquer Salmaan, Sunny Wayne, Fahad Fazil, Nivin Pauly, Hemanth Menon etc.

Gauthami wanted to go for medicine and to become a doctor but it is at the same time she got a call to act in the movie "Second Show". Even though she got admission for medicine, she had to drop that ambition of hers. Now she is pursuing a correspondence course in psychology. In the movie "Diamond Necklace", Gauthami plays a role similar to her real life. In that movie her father wanted to make her a doctor but apparently she became a nurse due to the situations. In her first film also she appeared as a nurse itself. However the decision taken by her was not a bad one. She got a good entry into the film industry and was able to leave an impression in the viewers.

Gauthami Nair, came into silver screen in the year 2012 through the Malayalam movie "Second Show", directed by Sreenath Rajendran. Her cousin's friend was the assistant director of the film. Thus they had sent across her bio-data and picture. It is only when she was called for audition that Gauthami came to know about it. In this movie Gauthami played the female lead role by giving life to the character "Geethu (Geethanjali)". Being her first movie, she was much excited about it, and she had got positive reviews as well. Gauthami says that she did not have a fear for camera. Her second movie was "Diamond Necklace", directed by the veteran director Lal Jose. It is a dream of almost all artists to act in a film produced by Lal Jose as most of his films will be hit. Gauthami, the young actress was lucky enough to get that chance in her second film itself.

The movie "Diamond Necklace", was also released in the year 2012. The film features Fahad Fazil, Samvrutha Sunil and Gauthami Nair in the lead roles. Gauthami played the role of a girl from Tamil Nadu who later left to Dubai to work as a nurse (Lekshmi). There she meets Fahad Fazil, who is a doctor (Oncologist) in the same hospital. They fell in love and thus the story is progressing. In this film Gauthami performed well as a smart talented young girl and the character demanded lot of variations in emotions as well. In an interview she had said that it was a nice experience to work in this film and she could see lot of place in Dubai as well. More than that she was super excited to work in a Lal Jose film. The movie was declared as a super-hit at the box-office.

Gauthami did not sign any contracts then as she was waiting for the release of the movie "Diamond Necklace" and to know the review about her performance and how well the audience has accepted her. She was lucky, the viewers have accepted her wholeheartedly. Her third film was "Chapters", directed by debutant director Sunil Ibrahim. This movie also featured a group of youngsters. Gautahmi's character in this movie was 'Priya'.

Her entry year was indeed a good year as she got to appear in three movies. In 2013 she has signed contract to act in the movies "Mirror", "The Road" etc.