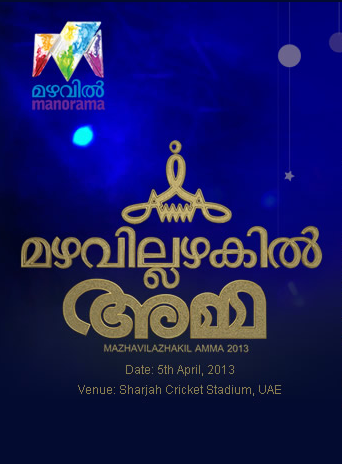 The real countdown for the greatest event of the year has begun as the program shouldered by Association of Malayalam Movie Artists (AMMA) is getting ready to reach the mass. To be held at Sharjah and Kochi, this show would be a visual feast as the superstars of malayalam film industry perform before your eyes.

The mega show would be staged on 5th April at UAE Sharjah cricket stadium followed by Port Trust Stadium at Kochi on 7th April 2013. Mazhavil Manorama which has bagged the exclusive satellite rights to telecast the show is reported to have spend 6 Crores and 10 Lakhs while the overall expense is calculated to be of 10 Crores.

The name "Mazhavil Azhakil AMMA" coined by Nedumudi Venu would be a tribute to the Indian cinema which has completed 100 years. As the show under the leadership of AMMA is being conducted after a gap of 3 years, excitement and expectations are on the peak with the movie fans gearing up to watch the extravagant event live before their eyes. 80 top most artists representing the malayalam movie fraternity would perform before the full packed audience which is being directed by T K Rajeev Kumar. The art direction of the show is safe in the hands of Sabu Cyril.

With the shooting of movies halted from 25th March, actors were busy rehersing for the show at Abad Plaza hotel at Kochi. The exciting part would be the presence of acting legends Mohanlal and Mammootty. Adding more excitement Mohanlal will dance to the tunes of South Korean pop idol Psy's Oppan Gangnam style.

As almost all malayalam actors being a part of the mega show, it was a herculean task for program director T K Rajeev Kumar to ensure due space for all of them. To make use of all artists, a concept was developed with the entire show splitting up into different parts.


Based on a fictional village, the stage is set for a temple, an old theatre and a local arts and sports club which features simultaneous showcase of festival celebrations at the temple, the movies run in the theatre and performances at the club.

The theateric concept is to pay tribute to 100 years of cinema, while the club would feature various art forms and the temple with spiritual connection. The comedy skit would be helmed by director Priyadarshan who has a flavour of handling homour at its best. Actors including Prithviraj, Indrajit, Bhavna and Meera Jasmine will be performing live with mouth watering dance sequences. Another attraction would be the sole performance of Dileep with his 'Sound Thoma' style dance.

The four and a half hour mega show is being conducted to raise fund for AMMA's welfare scheme providing financial support for the needy artistes. Mazhavil Manorama will be telecasting the show at convenient dates at the end of April 2013.