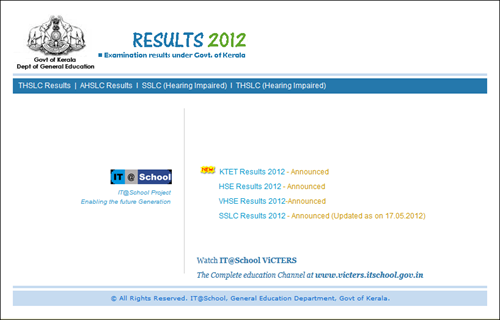 Kerala SSLC Results 2013 will be published on 24th April at 11.30 AM. Deputy director of Education Kerala M D Murali has told the press about the date of results declaration. Students who are waiting for Kerala SSLC results can visit the official websites after the results get published on 25th April 2013. In 2013 4, 79,650 students appeared for the exam. For the first time, the results are published much earlier with 50 centres under 3 zones finishing the tabulation process in record time. In 2012 the results were published on 28th April with 93.6% students getting chance for higher studies.

After the final tabulation, the papers which had been kept safe in the Pareeksha Bhavan will hand over the details to the education department which will be made public on 24th April. The Kerala SSLC exam which began on 11th March was concluded on 23rd March 2013. As per the rule the marks are rewarded according to a grading scale. Kerala SSLC Grading Scale is as follows:


According to the Indian system of education, the basics consist of five years of primary schooling to be followed by five years of secondary schooling. The Secondary School Leaving Certificate (commonly referred to as SSLC) is a certification which is given to a student for his/her successful completion of the examination at the end of study. After completing SSLC, students will have to complete the 2 years Pre-University Course (PUC) course which will bring an end to the twelve-year period of study.

Later he/she can choose for undergraduate studies in a university or pursue a shorter diploma course in an industrial training institute acquiring skills necessary for technical occupations. Another option is joining polytechnic for a three-year course of diploma in engineering. As the performance in the SSLC examination is the key factor in obtaining admission to HSS, students give much importance is given to the course.