The UPSC declared the Result of the Civil Service Examination (Main) 2012. The published result is based on the results of the written part of Civil Services (Main) Examination, 2012 held by the Union Public Commission in October, 2012 and the interviews for Personality Test held in March – April, for the appointments in Indian Administrative Service, Indian Foreign Service, Indian Police Service and Central Services, Group 'A' and Group 'B'.

Kerala positioned on the top in the Result by securing 3 ranks in the first five positions. Haritha V Kumar of Trivandrum Secured the first rank all over India in this prestigious exam. V Sreeram of Ernakulam ranked second and Alby John Verghese, a native of Anchalpetti in Muvattupuzha, came fourth. Kerala is getting the first rank achievement after a span of 20 years. The top performers from Kerala is as follows (in top 25). 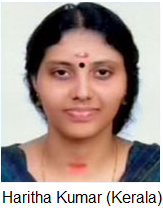 The Results are available in the official website of UPSC. UPSC has a "Facilitation Counter" near Examination Hall in its campus. Candidates can obtain any information / clarification regarding their examinations / recruitments on the working days between 1000 hours to 1700 hours in person or over telephone Nos. 23385271 / 23381125 / 23098543.