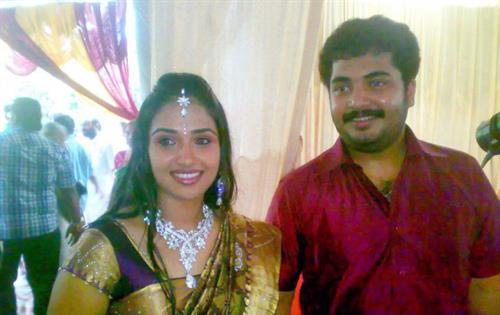 The month of May is to witness two celebrity marriages. Young actor Vinu Mohan is all set to tie knot with actress Vidyalakshmi on 19th May while heartthrob Asif Ali would marry his fiancée on 26th May. After the engagement held an year ago, Vinu would lent his heart to Vidya with blessings of their parents, relatives and close friends representing the film fraternity.

Vinu Mohan who debuted with Lohithadas directed Nivedyam will marry Vidya who had acted in few movies including"Parayan Marannathu" and "Neelambari". Vinu is the grandson of yesteryears actor Kottarakkara Sreedharan Nair and also the son-in-law of actor Sai Kumar.

The marriage will take place at Contour Back Waters Auditorium in Chenganassery. Actors close to Vinu Mohan and Vidyalakshmi will be attending the function while a grand reception is being organized on 24th May for the malayalam film fraternity at Gokulam Convention Centre, Kochi.

Vinu and Vidya who appeared in Neelambiri, was brought together by a proposal put forward by the relatives of Vinu who lived near the house of Vidya, at Thottakkad near Kottayam. The actress who had some projects in tamil would keep continue acting in movies after marriage. Vidya had also acted in Maharaja Talkies and MLA Mani.

Vinu Mohan is the son of actress Sobha Mohan while his brother Anu Mohan is also in movies. He who made an impressive debut with Nivedyam had acted in Sultan, Chattambinadu, Cycle, Dalmarmarangal, Colours, Keralotsavam, Inganeyum Oral, Koottukar, Holidays, Nadakame Ulakam, Ee Thirakkinidayil and Ajanth. His upcoming movies are My Dear Mummy, Ezhamathe Varavu and Bombay Mittai.