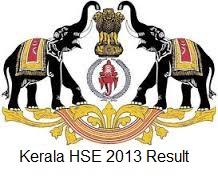 The Education Minister of Kerala, Sri Abdu Rabb announced the result of the 2013 HSE examination result in the press conference at 12:30 PM on 8th May. This year plus two registered a passing percentage of 81.34 percentage, which is lesser than the 2012 HSE passing percent. The Minister announced the results of various HS Examinations conducted for students of Open School, Technical Schools, Kalamandalam Arts School, Schools in Lakshadweep, Mahe and Gulf Countries along with the students of the Higher Secondary Schools. The HSE examination was conducted in March 2013 and 3,86,100 students appeared for the exam. 42 schools in the state secured 100 percentage pass in which 33 are unaided schools.