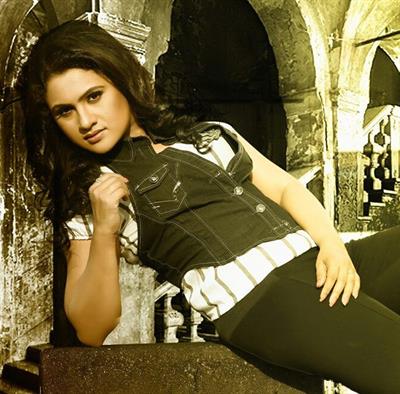 It's the dream of every young lady to pool into the tinseltown and develop a career in acting. Smitha Samuel, a nurse by profession too had a dream to become an actress someday. No wonder, Smitha landed in 'Bharya Athra Pora' directed by Akku Akbar. She will also be seen in Shyama Prasad's Artist, Prashanth Murali's 'Paisa Paisa' and Marthandan's Mammootty starrer 'Devathinte Swantham Cletus'.

The actress in on cloud nine as 'Bharya Athra Pora' is running successfully with positive reviews. Being her dream debut, the movie directed by Akku Akbar proved to be a stepping stone for Smitha who was excited to share screen space with legendry actor Jayaram. Having an experience working with some commercials, she is looking forward for her upcoming projects.

Smitha is currently busy with the shooting schedules of Shyamaprasad's 'Artist' and Prashanth Murali's 'Paisa Paisa'. She is gifted with an important role in Marthandan's Mammootty starrer 'Devathinte Swantham Cletus' which starts rolling in June.

Even though the young actress if getting many offers, she wishes to work with well-known names and good banners. As Smitha keep an eye on the director, banners and cinematographer, she makes a foot forward only after much thought. As an actress Smitha is ready to work with debutant directors if found the role interesting.

Smitha who wants to build a career in acting, do know the importance of taking care of the number of factors which has to be remembered before signing a movie. Even though there is ample space for young talents, the decisions taken on time is very vital.

Smitha who hails from Pathanamthitta is currently settled in Kochi along with her family. Smitha who is ready to take acting with much seriousness feels great for being a part of the malayalam film industry.