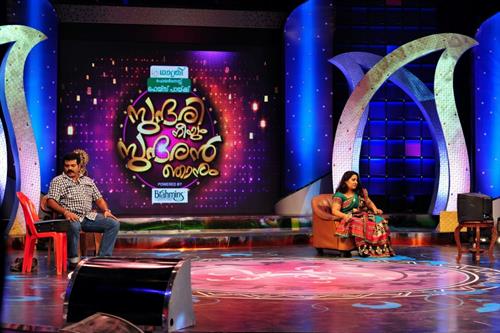 With reality shows dominating the malayalam television channels, the creative executives try to give a signature touch to each programme initiated by them. Asianet, Surya TV, Mazhavil Manoramma, Amrita TV are the leading entertainment channels which are bringing up reality shows related to music, humour and acting.

'Sundari Neeyum Sundaran Njanum' is a reality show telecast in Asianet, which had been running successfully for the past few months. Being one of the top rated programme, this reality show attracts viewers for its innovative design. Leading malayalam television actors do perform on stage which is being enjoyed by millions of spectators around the world.

This reality show which is a combination of music, dance and comedy add more to the life of television spectators who enjoy and keep it close to their heart. Participants divided into pairs, each group has to execute various programmes which come under different rounds. This entertainment show is a visual treat adding more to the living minds.

After couple of eliminations, the show has reached the grand finale which is to be held on 19th May 2013. Television viewers can watch Sundari Neeyum Sundaran Njanum Grand Finale Live on Asianet. For those who wish to enjoy it online can see it live streaming on those websites which stream Asianet.

This colourful 4 hours of entertainment show will be coupled with new skits, dance and music performed by the participants. After the final round, the results would be declared and team will emerge as winner.