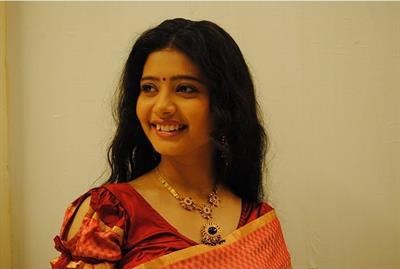 Young bubbly Ena Saha is on cloud nine after gaining an important role in Samir Thahir's upcoming movie Neelakasham Pachakadal Chuvannabhoomi which is set for release on 8th August.

Ena who had already shown her acting brilliance through Bengali movies and serials would play the role of a village belle named Gauri, the lady love of Sunny Wayne.

Ena who has busy with tight schedule of her serials landed into the world of entertainment which later gave her 5 movies in Bengali language. After making her presence alive in Maa, Raat Bhor Bristi, Bou Katha Kau, Bandhan and Subhasini, Ena will be seen in an English movie titled 'Sold'.

Ena was spotted by Sameer after seeing her movie 'Ami Aadu' on You Tube'. Even though Ena acted in Neelakasham Pachakadal Chuvannabhoomi, she had been a part of the movie schedule at Vishakhapattanam.

Even though Ena has not visited Kerala, she is eagerly waiting to see the beauty of 'Gods Own Country'. Heard from her friends who had experienced Kerala, Ena do wish try out the mutton curry that is served on Banana leaf.

This young Bengali girl who is currently pursuing her under graduation thinks that studies and movies will go hand in hand. She has high regard towards the crew of Neelakasham Pachakadal Chuvannabhoomi who had treated her like a kid.

Ena who wishes to work more in Malayalam cinema is waiting for the response for her acting debut in the industry.

Ena, even at her younger age was ready to take up matured roles which were later proved to be fit for her. With Neelakasham Pachakadal Chuvannabhoomi releasing on 8th August, it would be a testing time for Ena who already had proved her talent on big screen. Dulquer Salmaan and Manipuri beauty Surja Bala Hijam will also be seen in lead roles.