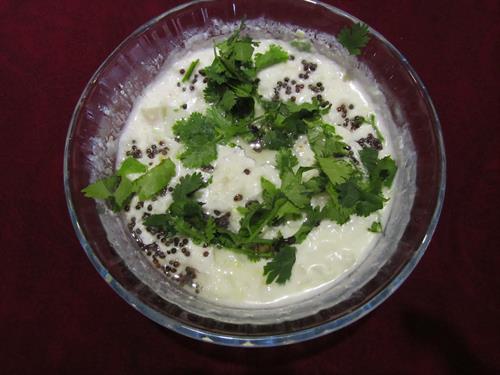 Curd pachadi or thairu pachadi is a special recipe of a Kerala people which is used to eat along with rice. Pachadi is used commonly during Onam when malayalees prepare rice and 10 different sorts of side dishes and are served in banana leaves. This is a favorite event for the native people of Kerala. It is so tasty that everyone will crave for more. During Onam, big meal (oonu) is prepared along with all side dishes in order to show that Kerala was once very rich and prosperous during the reign of 'Mahabeli Thamburan'. Thus every year people believe that Mahabeli would come and visit all his people during Onam.

Pachadi looks white in colour and has a sour taste. Thairu pachadi are also made using nellikai, beetroot, ladies finger (vendakka) and even tomatoes by the Brahmins. In this article you can discover the methods of preparing the tasty and favorite thairu pachadi for your family.

Ingredients must be washed and cleaned thoroughly and other should be fresh and clean. First grate and grind coconut to a fine paste. Then chop the green chillies and ginger into fine pieces. Take out the curd and beat it well so that the pachadi will taste better. Now add crushed coconut, green chillies and ginger to the curd. Finally add salt and start stirring it thoroughly. Heat the coconut oil properly and add curry leaves and mustard seeds into it and slightly fry it up. When the mustard leaves starts bursting, add it to the curd mixture. Mix it well for a while and you can have it after few minutes when it gets mixed properly. It should be mixed just before you serve it to others and coriander leaves can also be used to garnish it.

Curd pachadi (thairu pachadi) is a favorite dish which the people of Kerala love to have it along with rice. To make it even better you can add tomatoes to it. Tomatoes are used specially by Brahmins to make this pachadi. Thairu pachadi are also made using nellikai, beetroot, ladies finger (vendakka) and all. You can even make a recipe of your own by using any different vegetables in your house itself if you are interested.

Beetroot with onion and cumin.

If you like beetroot,you will this recipe. For those who do not like it, they may just change their mind.