Poruvazhy Peruviruthy Malanada Temple is popularly known as Peruviruthy Malanada is located at Edakkad Ward of Poruvazhy Village in Kunathoor Taluk. This Place is the northern border of Kollam district which Pathanamthitta and Alappuzha District share the boundaries. The temple is located equidistant from Adoor on the Northern and Sasthamkottah on the Southeast. It is also reachable from Kayamkulam and Karungapally on the NH 47 and Kottarakaraon the MC road. Peruviruthy Malanada is a good place for divine which gives peace and soul to us. 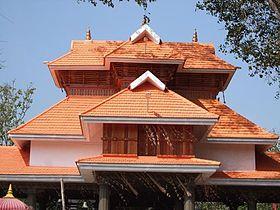 Malanada is from the name gives which the temples are located at the hills. Unlike other temples there is no deity, nor a Sree Kovil. Down the hill on the hill on the south and west we see vast low lying Paddy Leaves. In place of Shree Kovil and deity we could see only a raised platform called Althara or Mnadapam. In the Absence of an idol devotee they dedicate them to divine power.

The King also ensured that Gandhari, The Royal mother, Dussala his Sister, Karnan, his close associate and Angarajan, Dronar, his Guru, and the other members of his family were properly and adequately aboded and worshipped in the nearby place and members of the Karuva Caste are Poojaries in all such Places.

The Temple Administration of Malanada is vested in a committee elected by 7 Kara’s supposed having Malanada Appoopans territorial jurisdiction. Kunnathoor thaluk NSS Union and SDNP Union have their representatives in the Committee by having 2 members each. Kaduthamsserry Kudumbhayogam among Kuruva caste and Kettungal Kudumbayogam among Ezhava caste enjoying special status in the administration of the temple and this is all about the History of Peruviruthy Malanada.

The Annual Festival of malanada is Malakkuda means hill-the Temple of Kuda.an ornamental one used by oorali. It is celebrated during the summer during the second half of March every year. The second Friday of the Malayalam month Meenam is reckoned by the guests who visiting the temple. The arrival of the festival is proclaimed by Kodiyettu on the first Friday of Meenam .Although there is festival for 8 days from Kodiyettu to Mallakkuda there is no change with rituals and connected with it.

Kettukazhcha is a pageantry it is the most splendid part of the Maha Malakkuda Maholsavam.it involves with the spectacular view which is about to be fascinated view. Oorali after having an overall view of the scene from hid designated spot, visits and blesses comes from the god is display items. By around Sunset Kettukazhcha one by one moves up to Malanada temple.

Peruviruthy Malanada very proudly keeps under locks and key a gold flag it is the status symbol of Malanada Appooppan, The symbol of power and authority is the privilege of Mannan. Public Dharshan of Swarnakodi is permitted only a suspicious brings goodness and prosperity to mind.

Pallipana is believed to be as a ritual capable of eliminating the evil spirits afflicting a deity and its land people. At Malanada his ritual is performed without fail once in 12 years .It is believed that the observance elates the divine power of Malanada Appooppan and makes the people seven Kara’s rich and prosperous. Physical presence is during function and Contribution in cash and kind etc., Bring home wealthy and prosperity to all.