Kuriakose Elias Chavara was the first blessed man from the erstwhile Travancore Kingdom in India. He was the co-founder and first Prior General of the first congregation for men in the Syro-Malabar Catholic Church in India, now better known as the Servants of Mary Immaculate of Mount Carmel. The other Fathers who joined him in founding this Christian Community were Thoma Palackal and Thomas Porukura. During his lifetime, he was also the first Prior General for the similar congregation for women, i.e., the Congregation of Mother of Carmel. Under his rule, the new group was affiliated to the Order of Discalced Carmelites as its Third Order Institute. 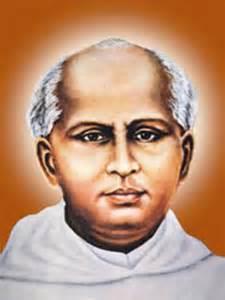 Kuriakose Chavara was born on February 10, 1805 at a place called Kainakary in the erstwhile Travancore Kingdom in India. At present, the place Kainakary is in the Alappuzha district of the present-day Kerala state. His parents were God fearing Iko (Kuriakose) Chavara and Mariam of Syro-Malabar Church. As was the custom followed in that point of time, Kuriakose was baptized on the 8th day at Chennankari Parish Church in Alappuzha. In his childhood, he attended the local school at Chavara to complete his formal education. During this period, he learned different languages, mathematics and basic sciences from a Hindu teacher.

Kuriakose entered the Pallipuram seminary premises in the year 1818 with a strong desire to become a Pastor. At that time, Father Thoma Palackal was working at the seminary as its Rector. After undergoing a course for a period of 11 years, he was ordained as a Bishop on November 29, 1829 at Arthunkal. After becoming Bishop, he presided over the Holy Qurbana for the first time at Chennamkari Church. After his ordination, Kuriakose remained in the Pastoral Ministry for some time to officiate its functions for the benefit of his followers. However, his service at the Pastoral Ministry was cut short when he was asked to return to the seminary to officiate for Malpan Thomas Palackal during his absence. While he was the seminary, he also took up the job of teaching the students who are doing the pastoral course.

While working in this seminary, he came in contact with Fathers Thoma Palackal and Thomas Porukara. While interacting with them, Father Kuriakose felt the need of establishing a separate congregation to further the service of the Catholic Church. This need was similarly felt by Fathers Thoma Palackal and Thomas Porukara. As a result of the confluence of thoughts of three Fathers, the idea of establishing a separate religious community was implemented. Accordingly, a religious community was established by the name Servants of Mary Immaculate of Mount Carmel. The foundation stone for the first monastery for the new community was laid on May 11, 1831. In the same period, Kuriakose took the additional name Elias following the tradition of the Carmelite community. According to this tradition, the founder of the community should accept a new name to symbolically represent his stature in the community.

In the subsequent years, Fathers Thoma Palackal and Thomas Porukara died of natural causes, leaving Kuriakose at the helm of affairs. Thus, Kuriakose Chavara became the Prior General of this newly formed congregation in the year 1855. Under his administration, the congregation became affiliated as a Third Order institute of the Order of Discalced Carmelites. From that point in time, the members of this order began to use the postnominal initials of T.O.C.D. While working as the founding Prior General of his congregation, he was appointed as the Vicar General of Syro-Malabar Church by Archdiocese of Verapoly in 1961. This extraordinary step was taken by the Archdiocese of Verapoly to negate the arrival of Mar Thomas Rokos in Kerala. This new congregation had arrived in Kerala without the proper credentials of the Roman Pope. Hence, Father Kuriakose was vehemently against the consecration by the newly arrived Church group.

While working as a religious head with a large congregation of devotees, Kuriakose took ample time off to do the work for the people of the society. He knew the importance of education in bringing positive changes to the society. In order to spread the education, he used his official powers to start new educational institutes throughout the state. This humble gesture from his side greatly helped the people of lower ranks of society, especially the women. Father Kuriakose Chavara gave greater emphasis to the intellectual development of women folks through education. Hence, many educational institutes for girls were started during his time.
Father Kuriakose also helped the people from the lower strata of the society by providing a quality educational system to them. In order to educationally uplift the people of the society, he introduced an educational system called as "Every Church has a school associated with it" for providing free education to all members of the society. These free schools in the state were called as "Pallikudams". To generate awareness about the need for a change in the outlook of the society, he started the first daily newspaper in Malayalam language. This newspaper was named as Nazrani Deepika. This newspaper was published from Mannanam. Presently, this newspaper is published from Kottayam with the name Deepika. Because of these steps he has taken and the noble belief he held about the society, the people of the state acknowledge him as one of the finest social reformers ever lived in the country.

In collaboration with Father Leopold Beccaro, O.C.D., Father Kuriakose founded the first native religious congregation for women in India. This religious community for women in India is called the Sisters of the Mother of Carmel (C.M.C.). C.M.C. was formed in the year 1966 to uplift the lives of women in the state. Presently, the sisters of C.M.C. run many reputed schools across the country.

After contributing his share to the society, Father Kuriakose died of natural cause on January 3, 1871 at Koonammavu. Blessed Chavara Kuriakose is gratefully remembered by the future leaders and members of the Christian communities in the country for his strenuous fight, strong stance and able leadership when the schism was forced on the Christian community by the arrival of Mar Thomas Rokos in the state. This enabled the Churches of Kerala to overcome the rift amongst the rank and file of different Christian communities in the state. In recognition of the services he rendered for the benefit of both devotes and the general public, Father Kuriakose Chavara was beatified along with the Saint Alphonsa of the Immaculate Conception on February 8, 1986. The beatification was announced by Pope John Paul II himself when he was touring the country in that year. His memorial is celebrated every year on January 3 at St. Joseph's Monastery Church where his mortal remains are preserved to enable the devotees to pray before him.

Father Kuriakose Elias Chavara was a social reformer, administrator and a deeply religious man. He was the co-founder and first Prior General of the first religious congregation for men in Syro-Malabar Catholic Church in India. He was also instrumental in establishing the Congregation of the Mother of Carmel for women. As a social reformer, he tried to inculcate in the minds of the people the importance of education in their life. With this aim in mind, he started a daily by the name Nazrani Deepika, which was later shifted to Kottayam. The daily is now being published in the name of Deepika. Through the founding of the Congregation of the Mother of Carmel, he paved the way for the establishment of schools throughout the country. He also established an educational system called as "A school along with every Church" to offer free education to the young folks of the society. He was also responsible for defending successfully the Churches of Kerala against the schism introduced by the arrival of Mar Thomas Rokos. In recognition of his contribution to the society, he was beatified along with Sister Alphonsa in the year 1986.